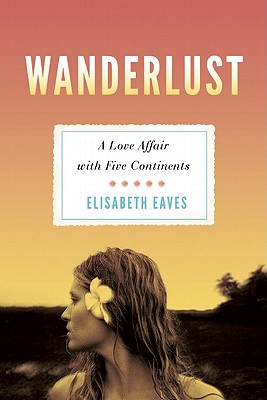 A Love Affair with Five Continents

Spanning 15 years of travel, beginning when she is a sophomore in college, Wanderlust documents Elisabeth Eaves's insatiable hunger for the rush of the unfamiliar and the experience of encountering new people and cultures. Young and independent, she crisscrosses five continents and chases the exotic, both in culture and in romance. In the jungles of Papua New Guinea, she loses herself -- literally -- to an Australian tour guide; in Cairo, she reconnects with her high school sweetheart, only to discover the beginning of a pattern that will characterize her life over the long-term: while long-distance relationships work well for her, traditional relationships do not.

Wanderlust, however, is more than a chronological conquest of men and countries: at its core, it's a journey of self-discovery. In the course of her travels, Eaves finds herself and the sense of home she's been lacking since childhood -- and she sheds light on a growing culture of young women who have the freedom and inclination to define their own, increasingly global, lifestyles, unfettered by traditional roles and conventions of past generations of women.

Praise For Wanderlust: A Love Affair with Five Continents…

"[A] heady, headlong chronicle of a decade and a half spent adrift…"
—The New York Times

"Eaves, a travel writer, has an eye for detail and the worldly insight of fellow globe-trotter Pico Iyer."
—ELLE Magazine

"Wanderlust celebrates the life-changing possibilities of the world around us and the rigors and riches of embracing them body and soul."
—National Geographic Traveler Magazine

Elisabeth Eaves is the author of Bare: The Naked Truth About Stripping, and her travel essays have been anthologized in The Best American Travel Writing, The Best Women's Travel Writing, and A Moveable Feast: Life-Changing Food Adventures from Around the World. Her writing has also appeared in numerous publications, including Forbes, Harper's, the New York Times, Slate, and the Wall Street Journal, and she holds a master's degree in international affairs from Columbia University. Born and raised in Vancouver, she lives in New York City.
Loading...
or
Not Currently Available for Direct Purchase