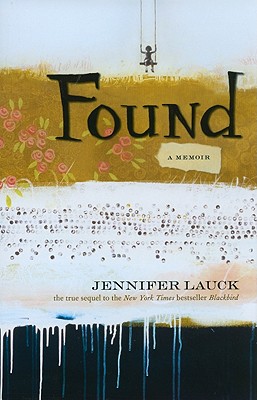 Found is Jennifer Lauck's sequel to her New York Times bestseller Blackbird: A Childhood Lost and Found. More than one woman's search for her biological parents, Found is a story of loss, adjustment, and survival. Lauck's investigation into her own troubled past leads her to research that shows the profound trauma undergone by infants when they re separated from their birth mothersa finding that provides a framework for her writing as well as her life.
Though Lauck's story is centered around her search for her birth mother, it's also about her quest to overcome her displacement, her desire to please and fit in, and her lack of a sense of selfall issues she attributes to having been adopted, and also to having lost her adoptive parents at the early age of nine. Throughout her thirties and early forties, she tries to overcome her struggles by becoming a mother and by pursuing a spiritual path she hopes will lead to wholeness, but she discovers that the elusive peace she has been seeking can only come through investigatingand coming to terms withher past.


Praise For Found: A Memoir…

I just finished Found, and I'm speechless. The child from Blackbird has grown up into an enormously wise, insightful, and honest woman. But that's all I'm saying. You'll want to discover the rest for yourself.”
Hope Edelman, author of The Possibility of Everything and Motherless Daughters

Found is a powerful story about the most primal love and loss. In prose that is as clear-eyed as it is beautiful, riveting as it is wise, Lauck shattered my heart and then put it back together again. I'll never forget this book.”
Cheryl Strayed, author of Torch

There are many ways of losing and being lost, and many ways of finding and being found. Jennifer Lauck has experienced most of them, and in Found we share Lauck’s heroic and spiritual journey as a displaced child who has lost both her birth and adoptive mothers and suffers from a series of abusive would-be mothers. She weaves a story of finding herself by becoming a mother and forgiving those who failed her.”
Betty Jean Lifton, author of Lost and Found: The Adoption Experience

Lauck provides an articulate voice for the questions and complexities that so often come up for adoptees. Adopted peopleand their familieswould do well to listen.”
Adam Pertman, Executive Director, Evan B. Donaldson Adoption Institute and author of Adoption Nation

This story will resonate with anyone who has felt lossloss of family, loss of self, loss of hope. The lesson here is resilience, keeping the hope alive, and knowing that no matter how desperate things are, they will get better.”
Nancy Verrier, author of The Primal Wound and Coming Home to Self