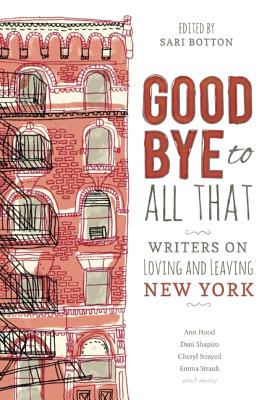 Goodbye to All That

In this classic collection, thirty writers share their own stories of loving and leaving New York, capturing the mesmerizing allure the city has always had for writers, poets, and wandering spirits. Their essays often begin as love stories do, with the passion of something newly discovered: the crush of subway crowds, the streets filled with manic energy, and the sudden, unblinking certainty that this is the only place on Earth where one can become exactly who she is meant to be.

They also share the grief that comes like a gut-punch, when the grand metropolis loses its magic and the pressures of New York's frenetic life wear thin for even the most dedicated dwellers. As friends move away, rents soar, and love—still—remains just out of reach, each writer's goodbye is singular and universal, just like New York itself.

Praise For Goodbye to All That: Writers on Loving and Leaving New York…

"The hip, witty, and sometimes heartbreaking essays in Goodbye to All That get to the bottom of most Big Apple miseries: big dreams cost big bucks to maintain. As many of these writers figured out, sometimes losing New York City is the only way to regain your credit rating, rent-stabilized living spaces, and sanity. From candid to kooky to classic, this collection sheds the love, light, and lyricism the gritty city deserves."
—Susan Shapiro, author of Speed Shrinking and Five Men Who Broke My Heart

"New York City is like a lover who left you for the slightly younger, prettier girl: you can smell him, taste him, yearn to have him back in your life. All the stories in this collection recall that lover and his many faults, and then make you forget them, all over again."
—Martha Frankel, author of Hats & Eyeglasses and executive director of the Woodstock Writers Festival

"Of course it would take more than one woman to capture the mythic, ever-shifting, exhilarating, and disappointing beast that is New York. The chorus of voices that is Goodbye to All That sings the city—both of the pavement and of the mind—to life, over and over."
—Nick Flynn, author of Another Bullshit Night in Suck City

Sari Botton is the essays editor for Longreads. She teaches writing courses at Catapult and in Bay Path University's MFA program. Her work has appeared in the New York Times, New York Magazine, the Village Voice, Harper's Bazaar, Marie Claire, More, and the Rumpus, plus other publications and anthologies. She lives in Kingston, New York.
Loading...
or
Not Currently Available for Direct Purchase