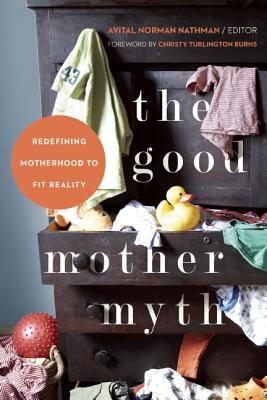 In an era of mommy blogs, Pinterest, and Facebook, The Good Mother Myth dismantles the social media-fed notion of what it means to be a "good mother."

This collection of essays takes a realistic look at motherhood and provides a platform for real voices and raw stories, each adding to the narrative of motherhood we don't tend to see in the headlines or on the news. From tales of mind-bending, panic-inducing overwhelm to a reflection on using weed instead of wine to deal with the terrible twos, the honesty of the essays creates a community of mothers who refuse to feel like they're in competition with others, or with the notion of the ideal mom—they're just trying to find a way to make it work.

With a foreword by Christy Turlington Burns and a contributor list that includes Jessica Valenti, Sharon Lerner, Soraya Chemaly, Amber Dusick and many more, this remarkable collection seeks to debunk the myth and offer some honesty about what it means to be a mother.

Avital Norman Nathman is a former teacher and lifelong learner turned freelance writer. Her work, which places a feminist lens on a variety of topics, including motherhood, gender, reproductive justice, and reproductive health, has been featured in Bitch magazine, The New York Times, Bamboo Family Magazine, RH Reality Check, CNN, Offbeat Families, HLNtv.com, and more. In addition to her blog, The Mamafesto, Norman Nathman has a regular series, “The Femisphere,” for Ms. magazine’s site, as well as a regular feminist parenting column, “Mommie Dearest,” for The Frisky.

While teaching high school social studies for a number of years, Norman Nathman completed her master’s thesis at Wesleyan University, with a concentration in women’s studies. Her thesis, which focused on the status of feminism in the lives of women in their twenties, only fueled her interest in investigating and commenting on the role of feminism for women in other aspects of their lives, including motherhood.

Based in Western Massachusetts with her husband and son, Norman Nathman enjoys digging in her urban garden, hosting dance parties in her kitchen, tweeting (follow her @TheMamafesto), and searching for the perfect cup of chai.

Christy Turlington Burns is a mother, a model, and the founder of Every Mother Counts, a campaign to end preventable deaths caused by pregnancy and childbirth around the world.
Loading...
or
Not Currently Available for Direct Purchase