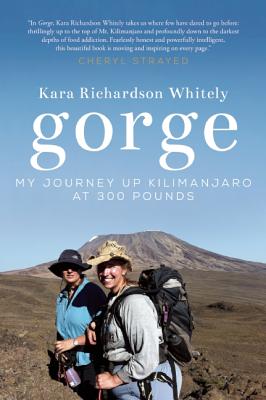 My Journey Up Kilimanjaro at 300 Pounds

Kara Richardson Whitely was determined to reach the summit of Mt. Kilimanjaro. But she struggled with each step -- with the grueling conditions on the steep mountainside, with the 300-pound weight of her own body, and with her food addiction, which came from a lifetime of reckoning with feelings of failure and shame. Deep in her personal gorge, Kara realized the only way out was up.

Gorge: My Journey Up Kilimanjaro at 300 Pounds is the raw story of Kara's ascent from the depths of self-doubt to the top of the world. Her inspiring trek speaks to every woman who has struggled with her self-image or felt that food was controlling her life. Honest and unforgettable, Kara's journey is one of intense passion, endurance, and self-acceptance.

Praise For Gorge: My Journey Up Kilimanjaro at 300 Pounds…

"In Gorge, Kara Richardson Whitely takes us where few have dared to go before: thrillingly up to the top of Mt. Kilimanjaro and profoundly down to the darkest depths of food addiction. Kara is fearlessly honest and powerfully intelligent. I was moved and inspired by every page of this beautiful book." --CHERYL STRAYED—-

"[Richardson Whitely] writes accessibly and frankly about her struggles with both Kilimanjaro and her self-image...This detailed account of her travails will give confidence not only to hesitant would-be mountaineers but to those, like her, whose biggest hurdle is 'to learn to be O.K. with who I was.'"
—New York Times Sunday Book Review

Named one of "Five Fabulous, Possibly Life-Changing Books" by Redbook—-

"As inspiring as it is refreshing."
—Backpacker

Kara Richardson Whitely has hiked Mount Kilimanjaro three times while weighing as much as 300 pounds. Kara, a motivational public speaker, has written for Self, Everyday with Rachael Ray, and Runner's World magazines. She was recently featured on Oprah's Lifeclass and Good Morning America, and in the New York Times, Redbook, Weight Watchers, and Backpacker magazines. She lives in Summit, New Jersey, with her husband and three children.
Loading...
or
Not Currently Available for Direct Purchase