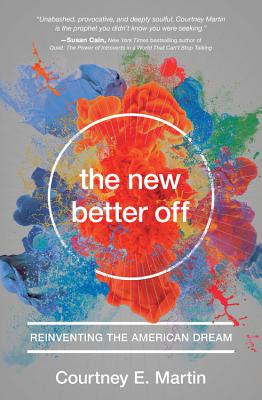 The New Better Off

Courtney E. Martin is an author, entrepreneur, and weekly columnist for On Being. She has authored five books, including Do It Anyway: The New Generation of Activists, and Perfect Girls, Starving Daughters: How the Quest for Perfection is Harming Young Women, and her work appears frequently in national publications such as the New York Times and the Washington Post. Martin speaks widely at colleges and conferences, including TED, and has appeared on the TODAY Show, Good Morning America, MSNBC, and The O’Reilly Factor. She is the co-founder of the Solutions Journalism Network and The Secret Society for Creative Philanthropy and a recipient of the Elie Wiesel Prize in Ethics. She lives with her family in Temescal Commons, a co-housing community in Oakland. Read more about her work at courtneyemartin.com.
Loading...
or
Not Currently Available for Direct Purchase