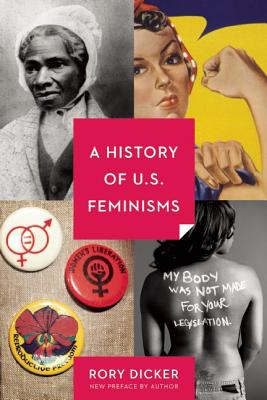 A History of U.S. Feminisms (Paperback)

The complete, authoritative, and up to date history of American feminism-intersectionality, sex-positivity

Updated and expanded, the second edition of A History of U.S. Feminisms is an introductory text that will be used as supplementary material for first-year women's studies students or as a brush-up text for more advanced students. Covering the first, second, and third waves of feminism, A History of U.S. Feminisms will provide historical context of all the major events and figures from the late nineteenth century through today.

The chapters cover: first-wave feminism, a period of feminist activity during the nineteenth and early twentieth centuries which focused primarily on gaining women's suffrage; second-wave feminism, which started in the '60s and lasted through the '80s and emphasized the connection between the personal and the political; and third-wave feminism, which started in the early '90s and is best exemplified by its focus on diversity, intersectionality, queer theory, and sex-positivity.

Rory Dicker teaches classes about women and literature, feminist pedagogy, and the history of American feminisms at Vanderbilt University, where she is the director of the Margaret Cuninggim Women's Center. She is the coeditor of Catching a Wave: Reclaiming Feminism for the 21st Century.
or support indie stores by buying on
Copyright © 2020 American Booksellers Association