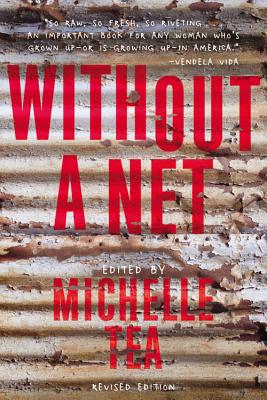 The Female Experience of Growing Up Working Class (Live Girls)

Indie icon Michelle Tea -- whose memoir The Chelsea Whistle details her own working-class roots in gritty Chelsea, Massachusetts -- shares these fierce, honest, tender essays written by women who can't go home to the suburbs when ends don't meet. When jobs are scarce and the money has dwindled, these writers have nowhere to go but below the poverty line. The writers offer their different stories not for sympathy or sadness, but an unvarnished portrait of how it was, is, and will be for generations of women growing up working class in America. These wide-ranging essays cover everything from selling blood for grocery money to the culture shock of "jumping" class. Contributors include Dorothy Allison, Bee Lavender, Eileen Myles, and Daisy HernÃ¡ez.

Praise For Without a Net: The Female Experience of Growing Up Working Class (Live Girls)…

Tea is the curator of the Amethyst Editions imprint at Feminist Press. She founded the literary nonprofit RADAR Productions and the international Sister Spit performance tours, and is the former editor of Sister Spit Books, an imprint of City Lights. She created Mutha Magazine, an online publication about real-life parenting. Her writing has appeared in Harper's, Cosmopolitan, the Believer, Marie Claire, n+1, xoJane, California Sunday Magazine, Buzzfeed, and many other print and web publications.
Loading...
or
Not Currently Available for Direct Purchase