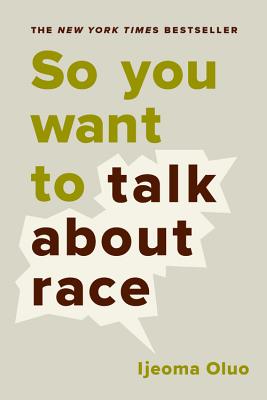 So You Want to Talk About Race

In this #1 New York Times bestseller, Ijeoma Oluo offers a revelatory examination of race in America

Protests against racial injustice and white supremacy have galvanized millions around the world. The stakes for transformative conversations about race could not be higher. Still, the task ahead seems daunting, and it’s hard to know where to start. How do you tell your boss her jokes are racist? Why did your sister-in-law hang up on you when you had questions about police reform? How do you explain white privilege to your white, privileged friend?

In So You Want to Talk About Race, Ijeoma Oluo guides readers of all races through subjects ranging from police brutality and cultural appropriation to the model minority myth in an attempt to make the seemingly impossible possible: honest conversations about race, and about how racism infects every aspect of American life.

"Simply put: Ijeoma Oluo is a necessary voice and intellectual for these times, and any time, truth be told." ―Phoebe Robinson, New York Times bestselling author of You Can't Touch My Hair

Praise For So You Want to Talk About Race…

"Simply put: Ijeoma Oluo is a necessary voice and intellectual for these times, and any time, truth be told."
—Phoebe Robinson, New York Times-bestselling author of You Can't Touch My Hair

"Oluo is out to help put words to action, which at this day and age, might be exactly what we need."—Forbes

"Read it, then recommend it to everyone you know."—Harper's Bazaar (Named a Top 10 Book of the Year)

"I don't think I've ever seen a writer have such an instant, visceral, electric impact on readers. Ijeoma Oluo's intellectual clarity and moral sure-footedness make her the kind of unstoppable force that obliterates the very concept of immovable objects."—Lindy West, New York Times-bestselling author of Shrill

"A guidebook for those who want to confront racism and white supremacy in their everyday lives, but are unsure where to start."—Bitch

Ijeoma Oluo is the author of Mediocre and a writer and speaker whose work on race has been featured in the New York Times and the Washington Post. She was named to the 2021 Time 100 Next list, has twice been named to The Root 100, and received the  Harvard Humanist of the Year award. She lives in Seattle, Washington.