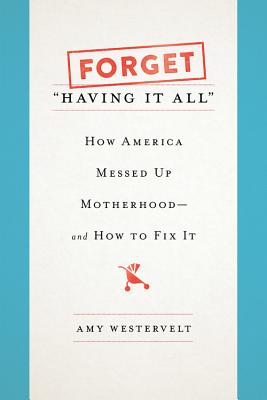 Forget "Having It All"

How America Messed Up Motherhood--and How to Fix It

A clear-eyed look at the history of American ideas about motherhood, how those ideas have impacted all women (whether they have kids or not), and how to fix the inequality that exists as a result.

After filing a story only two hours after giving birth, and then getting straight back to full-time work the next morning, journalist Amy Westervelt had a revelation: America might claim to revere motherhood, but it treats women who have children like crap. From inadequate maternity leave to gender-based double standards, emotional labor to the "motherhood penalty" wage gap, racist devaluing of some mothers and overvaluing of others, and our tendency to consider women's value only in terms of their reproductive capacity, Westervelt became determined to understand how we got here and how the promise of "having it all" ever even became a thing when it was so far from reality for American women.

In Forget "Having It All," Westervelt traces the roots of our modern expectations of mothers and motherhood back to extremist ideas held by the first Puritans who attempted to colonize America and examines how those ideals shifted -- or didn't -- through every generation since. Using this historical backdrop, Westervelt draws out what we should replicate from our past (bringing back home economics, for example, this time with an emphasis on gender-balanced labor in the home), and what we must begin anew as we overhaul American motherhood (including taking a more intersectional view of motherhood, thinking deeply about the ways in which capitalism influences our views on reproduction, and incorporating working fathers into discussions about work-life balance).


In looking for inspiration elsewhere in the world, Westervelt turned not to Scandinavia, where every work-life balance story inevitably ends up, but to Japan where politicians, in an increasingly desperate effort to increase the country's birth rates (sound familiar?), tried to apply Scandinavian-style policies atop a capitalist democracy not unlike America's, only to find that policy can't do much in the absence of cultural shift. Ultimately, Westervelt presents a measured, historically rooted and research-backed call for workplace policies, cultural norms, and personal attitudes about motherhood that will radically improve the lives of not just working moms but all Americans.

Praise For Forget "Having It All": How America Messed Up Motherhood--and How to Fix It…

"Westervelt takes a deep dive into motherhood in American society...[with] a crucial nod to intersectional feminism."—Booklist

"With an intellectual history of American motherhood from the arrival of the English settlers, Westervelt sets out to uncover 'how it was that a culture that superficially holds motherhood in such high esteem could in fact have so little regard for women who have children.' She's pragmatic in her response, suggesting a policy fix and a cultural fix at the end of each chapter that she thinks could be implemented without 'massive cultural and economic change.' Her prose, direct and colloquial, is punctuated by deeply satisfying moments of ire at the demands placed on working mothers."—Pacific Standard

"A thorough and insightful read full of historical context and tangible suggestions for how we can overhaul American motherhood."—SheKnows

As a cofounder of Climate Confidential -- an award-winning collaboration between six female journalists who syndicated environmental reporting to various national outlets -- she helped get longform investigative environmental journalism into a host of national publications, including the Atlantic, Quartz, Smithsonian, Modern Farmer, and many more. In 2014 she was awarded a Rachel Carson Award for environmental journalism.
Loading...
or support indie stores by buying on