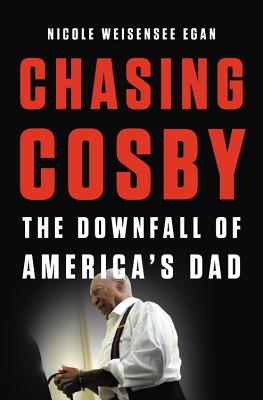 The Downfall of America's Dad

Bill Cosby's decades-long career as a sweater-wearing, wholesome TV dad came to a swift and stunning end on April 26, 2018, when he was convicted of drugging and sexually assaulting Andrea Constand. The mounting allegations against Bill Cosby--more than 60 women have come forward to accuse him of similar crimes--and his ultimate conviction were a shock to Americans, who wanted to cleave to their image of Cosby as a pudding-pop hero.

Award-winning journalist and former People magazine senior writer Nicki Weisensee Egan was the first reporter to dig into the story when Constand went to the police in 2005. Other news organizations looked away, but Egan doggedly investigated the case, developing ties with entrenched sources and discovering incriminating details that would ultimately come to influence the prosecution.

In her debut book, Chasing Cosby, Egan shares her firsthand account of Cosby's 13-year run from justice. She tells us how Cosby planned and executed his crimes, and how Hollywood alliances and law enforcement knew what Cosby was doing but did nothing to stop him. A veteran crime reporter, Egan also explores the cultural and social issues that influenced the case, delving into the psychological calculations of a serial predator and into the psyche of a nation that fervently wanted to put their faith in the innocence of "American's Dad."

Rich in character and rife with dramatic revelations about popular culture, media power, and our criminal system, Egan's account will inform and fascinate readers with its candid telling of humanity's most enduring tale: the rise and fall of a cultural icon.


Praise For Chasing Cosby: The Downfall of America's Dad…

"In clear, vivid prose, [Egan] illuminates how a beloved star was exposed as a violent predator, and how Cosby's conviction became the first of the #MeToo era . . . Specialists on everything from victim behavior to forensic toxicology contextualize Egan's findings. She raises zoom-out questions that Cosby's conviction alone doesn't answer, about wealth, race... the criminal justice system and 'the dangers of deifying celebrities.' And far from feeling self-indulgent or distracting, Egan's willingness to share her human connection to her professional endeavor makes her writing resonate with a greater power."—Washington Post

"[P]ursuing the case of sexual assault allegations against Bill Cosby since 2005, [Egan] digs into the double life of 'America's Dad.'"—People

"Most people are aware that actor Bill Cosby was convicted of sexual assault in 2018; however, many may be surprised to learn that the victim in that case reported the assault to law enforcement back in 2005 . . . Egan, who worked for the Philadelphia Daily News at the time, followed the story from the beginning... [S]he traces some allegations back to the 1970s, then examines the factors that allowed Cosby to continue these behaviors for so long . . . VERDICT: The shocking details of the calculated, predatory crimes committed by a formerly beloved American icon are sure to draw wide interest."—Library Journal

"Egan's harrowing, meticulously reported book reveals how, for half a century, one of our most respected, most beloved entertainers got away with brazenly drugging and raping more than sixty women, abetted by prominent figures in law enforcement, the news media, and Hollywood. Although Cosby seemed to believe he was untouchable, Egan documents how he was eventually brought to justice by dogged prosecutors, some very courageous women, and the #MeToo movement."—Jon Krakauer, New York Times bestselling author of Into the Wild, Into Thin Air, Under the Banner of Heaven, and Where Men Win Glory

"Veteran crime writer Nicole Weisensee Egan takes apart one of the first great cases of the #MeToo era with finesse and ace reporting. She brings years of up-close reportage on the Cosby case, plus dozens of new interviews with accusers and back room accounts of the endless court battles, to expose the secret life of America's Dad, a premeditated sex predator and the trail of private wreckage he inflicted for decades."—Nina Burleigh, award-winning journalist and New York Times bestselling author of Golden Handcuffs: The Secret History of Trump's Women

"You might think you know the story of Bill Cosby's downfall. But until you've read investigative journalist Nicole Weisensee Egan's book, you don't know the whole story. Reporting on the case for more than a decade, Egan takes readers on a riveting journey documenting how numerous women came forward with horrific accounts of abuse leading to Cosby's arrest and ultimate conviction. The book is incredibly researched, compellingly written, and a must-read for anyone who followed the Cosby case or who wants to know the insider account of the unbelievable true story."—Shanna Hogan, New York Times bestselling author of Picture Perfect

"Egan's fascinating account of Cosby's 13-year run from justice, including how he planned and executed his crimes, and how Hollywood and the law looked the other way. She delves into the psychological calculations of a serial predator and into the psyche of a nation that fervently wanted to put their faith in the innocence of 'American's Dad.'"—Mary Kay Andrews, New York Times bestselling author of Beach Town

"The power of Chasing Cosby flows from Nicole Weisensee Egan's steadfast resolve to ascertain the truth. Her dogged reporting and deft storytelling paints a worthy portrait of those who suffered at the hands of 'America's Dad.' Egan's work reminds us of the great price our society pays when fame protects the mighty, and what it means to not be believed."—Chelsia Rose Marcius, author of Wild Escape: The Prison Break from Dannemora and the Manhunt that Captured America

"Nicole Weisensee Egan's powerful, personal account of the Cosby case is a perfect cautionary tale for our time. In the middle of the #MeToo movement, this riveting look at the shattered nice-guy facade of a man once dubbed 'America's Dad' unearths a greater truth: that the celebrities and leaders we exalt on TV (and elsewhere) are not always the people we want them to be; and sometimes the truth one finds behind the curtain of a public persona is much darker than we ever want to believe."—Mark Dagostino, New York Times bestselling co-author of Accused: My Fight for Truth, Justice, and the Strength to Forgive

Nicole Weisensee Egan has been the lead investigative journalist reporting on the Cosby case since 2005, first for the Philadelphia Daily News and then as a Senior Writer for PEOPLE magazine. She covered the trial for The Daily Beast and is already working on her second book. She lives in Royersford, PA.