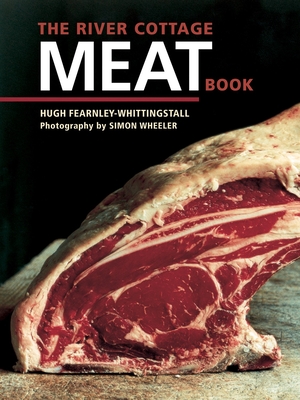 First published in the United Kingdom, THE RIVER COTTAGE MEAT BOOK quickly became an underground hit among food cognoscenti around the world. Now tailored for American cooks, this loving, authoritative, and galvanizing ode to good meat is one part manifesto on high-quality, local, and sustainable meat production; two parts guide to choosing and storing meats and fowl; and three parts techniques and recipes for roasting, cooking, barbecuing, preserving, and processing meats and getting the most out of leftovers. With this thought-provoking and practical guide, meat eaters can knowledgeably buy and prepare meat for better health and better living, while supporting the environment, vibrant local economies, and respectful treatment of animals.


• Already a sensation in the United Kingdom, this groundbreaking treatise on choosing and preparing meat is now available in the United States for the first time.
• Includes more than 100 recipes and more than 200 full-color photographs.
• Thoughtfully Americanized, with complete information about assorted cuts (including illustrations), production standards, and sources for buying and learning about meats in the United States.
• British edition has sold 150,000 copies.


Praise For The River Cottage Meat Book: [A Cookbook]…

“Fearnley-Whittingstall asks us to take grown-up moral responsibility for the act of eating meat—certainly enough responsibility to inquire about how the animal lived and died. All this is spelled out at fervent (and deserved) length before we get near a bit of cooking instruction. Luckily, Mr. Fearnley-Whittingstall turns out to be as zealous a cook as he is a reformer, equally able to appreciate the simplicity of Irish stew or a good beefburger, or to lead people through the intricacies of pork pie or cider-cured ham.”—New York Times

“Those who find that calves' livers and pig's trotters are best contemplated at a distance should keep well away from Hugh Fearnley-Whittingstall. Those of us with the opposite problem worship him as a god. This is not a case of macho posturing over a barbecue pit: There is more cooking know-how in Fearnley-Whittingstall's little finger than you will find in the graduating class of any cooking school in the country. His book is stuffed with wit, erudition, and one slow-cooked, lovingly constructed recipe after another.”—NPR.org Holiday 2007

One of the Year's Best Cookbooks: “Hugh Fearnley-Whittingstall is a brilliant, argumentative British cook and food writer . . . his recipes happen to be terrific.”—Gourmet

“This is one to read and cook from during barbecue season—and to get inspired by the rest of the year.”—Bon Appetit

“A book to help us truly understand the philosophical and pragmatic aspects of the meat on our table.”—Boston Globe

“The ultimate reference for the serious carnivore.”—New York Daily News

“This guy gets physical with meat . . . A trencherman's manual of meat that includes recipes—from down-home steak-and-kidney pie to more exalted fare like a salad of seared pigeon breast with pan-juice vinaigrette—and graphic how-tos on buying and butchering, plus answers to questions you maybe never asked . . . More than you can digest? No doubt. More than you want? No way. Fearnley-Whittingstall's down-in-the-trenches humor and tone of earthy authority keep you coming back for another slice.”
—Forbes

“His big, impressive meat book . . . has now been Americanized . . . Fearnley-Whittingstall is passionate and opinionated but not heavy-handed, and his sense of humor is evident throughout . . . A good companion to Fergus Henderson's The Whole Beast, this unique title will be important as both a reference and a cookbook.”—Library Journal Starred Review

“Hugh Fearnley-Whittingstall believes that the animals we eat deserve respect, both for their sake and ours.”—Conde Nast Traveler

HUGH FEARNLEY-WHITTINGSTALL is a renowned British broadcaster, writer, farmer, educator, and campaigner for real food. The author of seven books, Hugh lives with his wife and three children on the River Cottage farm in Devon, England.
Loading...
or support indie stores by buying on