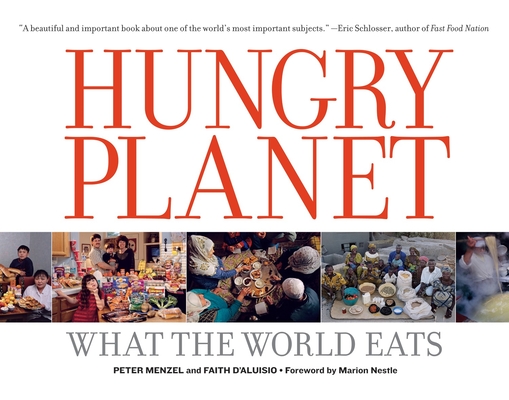 What the World Eats

The age-old practice of sitting down to a family meal is undergoing unprecedented change as rising world affluence and trade, along with the spread of global food conglomerates, transform eating habits worldwide. HUNGRY PLANET profiles 30 families from around the world--including Bosnia, Chad, Egypt, Greenland, Japan, the United States, and France--and offers detailed descriptions of weekly food purchases; photographs of the families at home, at market, and in their communities; and a portrait of each family surrounded by a week's worth of groceries. Featuring photo-essays on international street food, meat markets, fast food, and cookery, this captivating chronicle offers a riveting look at what the world really eats.

The paperback edition of the 2006 James Beard Book of the Year featuring a photojournalistic survey of 30 families from 24 countries and the food they eat during the course of one week. Winner of the 2006 James Beard Award for writings on food, finalist for the 2006 IACP Cookbook Award for food reference/technical, and winner of the 2005 Harry Chapin Media Award. Includes more than 300 photographs plus essays on the politics of food by Marion Nestle, Michael Pollan, Charles C. Mann, Alfred W. Crosby, Francine R. Kaufman, Corby Kummer, and Carl Safina. The hardcover edition has sold 40,000 copies.Awards

finalist for the 2006 IACP Cookbook Award

Reviews"The photos are at once charming and astonishing in their honesty."—Milwaukee Journal Sentinel“A treasure trove of information . . . The photographs alone are worth the price of admission.”—Travel Girl“Arresting, beautiful, enlightening and infinitely human, this is a collection of full-page photos of families around the world surrounded by what they eat in a single week -- from Bhutan to San Antonio. Read the illuminating statistics and the essays. This is a book for the family and for the classroom. You won't see the same old "aren't we better than them" attitude, nor will you be shamed. This book reminds us that what we eat is the simplest, yet most profound, thread that ties us together.”—Lynne Rossetto Kasper, Host of American Public Media's Public Radio Program, The Splendid Table.“the politics of food at its most poignant and provocative. A coffee table book that will certainly make coffee interesting.” –Washington Post“While the photos are extraordinary--fine enough for a stand-alone volume--it's the questions these photos ask that make this volume so gripping. This is a beautiful, quietly provocative volume.” -Publishers Weekly, starred review“This book of portraits reveals a planet of joyful individuality, dispiriting sameness, and heart-breaking disparity. It's a perfect gift for the budding anti-globalists on your list” -Bon Appetit“[A] unique photographic study of global nutrition” –USA Today“Grabs your attention for the startlingly varied stories it tells about how people feed themselves around the world. Its contents are based on detailed research, beautifully photographed, presented with often disturbing clarity.” -Associated Press"The world's kitchens open to Peter Menzel and Faith D'Aluisio, the intrepid couple who created the series of books called Material World.... As always with this couple's terse, lively travelogues, politics and the world economy are never far from view." -New York Times Book Review “illuminating, thought-provoking, and gloriously colorful” –Saveur magazine“Richly colored and quietly composed photographs....Hungry Planet is not a book about obesity or corporate villains; it's something much grander. Its premise is simple to the point of obvious and powerful to the point of art.” -Salon.com“A fascinating nutritional and gustatory tour.” -San Jose Mercury News“A grand culinary voyage through our modern world...a lushly illustrated anthropological study.” -San Francisco Bay Guardian“The talked-about book of the season...the stories are fascinating.” -Detroit Free Press“Unique and engaging” –Delta Airlines Sky magazine

PETER MENZEL and FAITH D'ALUISIO are the co-creators of the books Material World: A Global Family Portrait and Women in the Material World. They are also the co-authors of Man Eating Bugs and Robo sapiens: Evolution of a New Species. They live in Napa, California, and are the parents of Josh, Jack, Adam, and Evan.


PETER MENZEL and FAITH D'ALUISIO are the co-creators of the books Material World: A Global Family Portrait and Women in the Material World. They are also the co-authors of Man Eating Bugs and Robo sapiens: Evolution of a New Species. They live in Napa, California, and are the parents of Josh, Jack, Adam, and Evan.
or
Not Currently Available for Direct Purchase