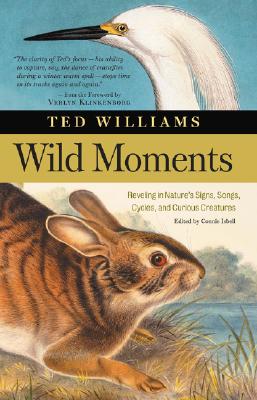 For more than 30 years Ted Williams has been hailed as one of the foremost nature writers in the United States, with articles and columns that appear in a wide range of national magazines--from Fly Rod & Reel to Audubon. His eloquent advocacy for a host of environmental and wildlife conservation issues have won him prestigious awards. The National Wildlife Federation presented him with their Conservation Achievement Award; his conservation writing won him the Federal Wildlife Officers Association Award; the Outdoor Writers Association of America recognized him with their highest honor, the Jade of Chiefs; and the Coastal Conservation Association of New York named him "Conservationist of the Year."

Wild Moments is a collection of Williams's beautifully crafted seasonal observation columns that is sure to be prized by Ted Williams's fans and to attract a broad new readership. The text is complemented by the illustrations of John Burgoyne, himself the winner of more than 150 awards in the United States and Europe.

Williams explains the weather conditions that bring out the brightest reds in autumn leaves, when to watch for the massive migration of northern flickers, how hungry wolf spiders catch their prey, and why American goldfinches wait until July or August to build a nest and start breeding.

Although Williams's home is in Massachusetts, his columns describe the action of the natural world all across North America, with a few forays to other parts of the globe. So readers will learn why there are so many aspens in Yellowstone National Park and the extent of the burrowing owl's habitat (from southwestern Canada to Argentina).

Written in an inviting, accessible, and entertaining style, these brief columns are packed with in-depth information on a broad range of topics. Anyone who loves the natural world will find this book irresistible.

Ted Williams is a longtime contributor to Audubon magazine and writes the monthly “Recovery” column for The Nature Conservancy’s Cool Green Science. He is the conservation editor for Fly Rod & Reel magazine and serves as national chair of the Native Fish Coalition. Williams was recognized by the Outdoor Writers Association of America (OWAA) as the nation’s best outdoor columnist for his work in Audubon magazine and has received numerous other national writing and conservation awards. He lives in Grafton, Massachusetts.

Verlyn Klinkenborg is the author of The Last Fine Time, Making Hay, and The Rural Life. His articles have appeared in many magazines, including The New Yorker, Harper's, Audubon, Smithsonian, and The New Republic. He teaches creative writing at Harvard University.
Loading...
or
Not Currently Available for Direct Purchase