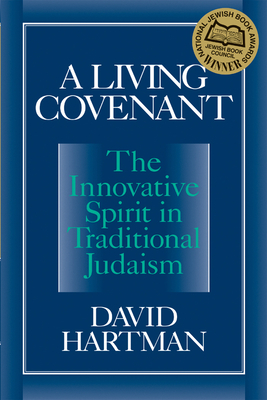 "'A covenantal vision of life, with mitzvah (divine commandment) as the central organizing principle in the relationship between Jews and God, liberates the intellect and the moral will. I seek to show that a tradition mediated by the Sinai covenant can encourage the development of a human being who is not afraid to assume responsibility for the ongoing drama of Jewish history. Passive resignation is seen not to be an essential trait of one whose relationship to God is mediated by the hearing of mitzvot."
--from the Introduction

This interpretation of Jewish teaching will appeal to all people seeking to understand the relationship between the idea of divine demand and the human response, between religious tradition and modernity. Hartman shows that a life lived in Jewish tradition need not be passive, insulated, or self-effacing, but can be lived in the modern pluralistic world with passion, tolerance, and spontaneity.

The Judaic tradition is often seen as being more concerned with uncritical obedience to law than with individual freedom and responsibility. In A Living Covenant, Hartman challenges this approach by revealing a Judaism grounded in a covenant--a relational framework--informed by the metaphor of marital love rather than that of parent-child dependency. This view of life places the individual firmly within community. Hartman shows that the Judaic tradition need not be understood in terms of human passivity and resignation, but rather as a vehicle by which human individuality and freedom can be expressed within a relational matrix.