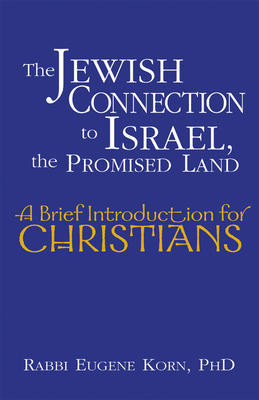 The Jewish Connection to Israel, the Promised Land

A Brief Introduction for Christians

A window into the Jewish People's connection to Israel--written especially for Christians.

"Israel has taken Jewish sacred history, peoplehood and ethics out of the realm of speculation and put them into the crucible of real life experience. In returning the Jewish People to its homeland, Israel has returned Jews to material reality--with all its challenges. The Jewish People's return to the Land returns Judaism to its original vision and the Jewish People to the responsibilities of the biblical covenant."
--from Chapter 9

Along with illuminating the importance of Israel for Jews, this special book examines the Jewish return to Zion as a significant theological event that strengthens the foundations of the Christian faith and its mission.

In clear and accessible language, this introduction guides Christians through the essential meanings of Israel for the Jewish People and for the world. It defines Israel as an indispensable part of Judaism's vision for the Jewish People to be "a kingdom of priests and a holy people," as a partner with God in the Bible's sacred covenant. It examines Israel, a sovereign Jewish state, as a safe refuge and home for Jews fleeing persecution anywhere in the world, and how this gives meaning to the Jewish People's convictions that the future can be more secure than the past.