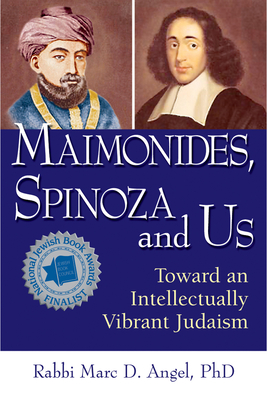 Maimonides, Spinoza and Us

Toward an Intellectually Vibrant Judaism

A challenging look at two great Jewish philosophers, and what their thinking means to our understanding of God, truth, revelation and reason.

Moses Maimonides (1138-1204) is Jewish history's greatest exponent of a rational, philosophically sound Judaism. He strove to reconcile the teachings of the Bible and rabbinic tradition with the principles of Aristotelian philosophy, arguing that religion and philosophy ultimately must arrive at the same truth.

Baruch Spinoza (1632-77) is Jewish history's most illustrious "heretic." He believed that truth could be attained through reason alone, and that philosophy and religion were separate domains that could not be reconciled. His critique of the Bible and its teachings caused an intellectual and spiritual upheaval whose effects are still felt today.

Rabbi Marc D. Angel discusses major themes in the writings of Maimonides and Spinoza to show us how modern people can deal with religion in an intellectually honest and meaningful way. From Maimonides, we gain insight on how to harmonize traditional religious belief with the dictates of reason. From Spinoza, we gain insight into the intellectual challenges which must be met by modern believers.

Rabbi Marc D. Angel, PhD, is founder and director of the Institute for Jewish Ideas and Ideals (www.jewishideas.org). Rabbi emeritus of Congregation Shearith Israel of New York City, he is author and editor of twenty-nine books, including Maimonides, Spinoza and Us: Toward an Intellectually Vibrant Judaism; Foundations of Sephardic Spirituality: The Inner Life of Jews of the Ottoman Empire (both finalists for the National Jewish Book Award); and Maimonides-Essential Teachings on Jewish Faith and Ethics: The Book of Knowledge and the Thirteen Principles of Faith-Annotated and Explained (all Jewish Lights).Rabbi Marc D. Angel, PhD, is available to speak on the following topics: Maimonides, Spinoza and Us: Confronting Basic Issues of FaithThe Orthodox and Non-Orthodox Jewish Communities: Can We Learn from Each Other?Conversion to Judaism: What the Jewish Community Can Learn from ConvertsChoosing to Be Jewish: The Orthodox Road to ConversionLosing the Rat Race, Winning at Life: Ethics for Moderns
Loading...
or support indie stores by buying on