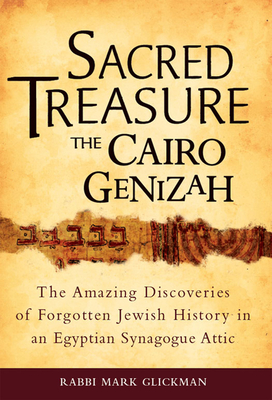 The amazing adventure story of one of the most important discoveries in modern religious scholarship. This astounding cache of nearly 300,000 early and medieval manuscripts has forever transformed our knowledge of Jewish and Muslim history and much more.

Rabbi Mark Glickman, a popular speaker on Judaism and modern life, is rabbi of Congregations Kol Ami in Woodinville, Washington, and Kol Shalom on Bainbridge Island, Washington. He is author of Sacred Treasure-The Cairo Genizah: The Amazing Discoveries of Forgotten Jewish History in an Egyptian Synagogue Attic. He also writes a regular religion column for the Seattle Times and has been featured in other books and journals.Rabbi Mark Glickman is available to speak on the following topics: Sacred Treasure: The Cairo GenizahThe Largest Jewish Library in the World: How the Nazis Preserved Some of European Jewry's Greatest Literary TreasuresWatching Our Words: Jewish Insights on Gossip and Sacred SpeechSnipers, Searchers and Sages: A Rabbi's Experience in Non-Jewish AmericaMovers, Shakers and a Few Real Nuts: How a Handful of Mentally-Ill Individuals Transformed the History of the Jewish PeopleClick here to contact the author.
Loading...
or support indie stores by buying on