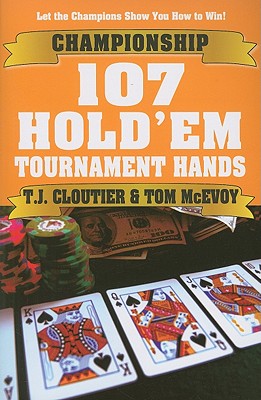 This classic reduced by $10! Two superstar champion players update their practical advice on how to play key tournament hands so that readers can win poker championships!

Tom McEvoy, the “Champion of Champions” has won four World Series of Poker gold bracelets including the main event championship in 1983, He also won the inaugural Champion of Champions tournament at the 2009 WSOP in competition against the other living winners of the World Championship of Poker. He also won the 2005 Professional Poker Tour tournament, becoming the first ever to win a PPT championship and a WSOP main event championship. A member of the Poker Hall of Fame, T.J. Cloutier has six World Series of Poker titles and has appeared at the final table of the WSOP Main Event a remarkable four times. T.J. won the Player of the Year award in both 1998 and 2002, and. has won more major tournament titles—60 and counting—than any player in the history of poker. He is the author of How to Win the Championship and co-author of Championship Omaha, Championship No-Limit and Pot-Limit Hold'em and Championship Hold'em.
Loading...
or
Not Currently Available for Direct Purchase