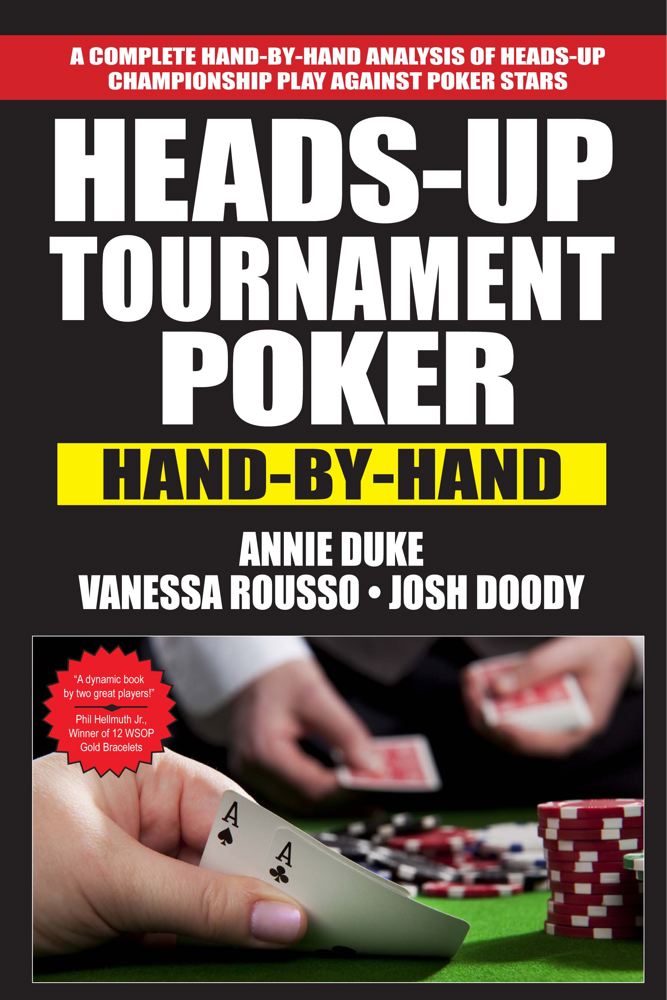 You’ll learn how two of the best heads-up tournament players think through every decision in more than 600 hands as they battle their way to the final round in the prestigious NBC Heads-Up Championship. You’ll see their cards and hear their thoughts through twelve matches as they devise masterful strategies to defeat world-class opponents. Annie Duke and Vanessa Rousso give you a powerful mix of the practice, theory, and strategies for heads-up tournaments—where you must risk chips on every hand you’re dealt—and show you what they did to beat the best players in the world. You’ll see what works and what doesn’t as amazing bluffs and poorly executed tactics are deconstructed. You’ll learn how to design a game plan for each opponent, how to adjust your plan as the match progresses, how to play against pros and amateurs alike, and how to get the best of it against superior opponents. Their detailed analysis of when to change your strategy due to fluctuating chip counts, the flow of the match, and dynamic maneuvers make this book the bible of heads-up play.

Annie Duke won a World Series of Poker gold bracelet, the $2 million top prize in the WSOP’s Tournament of Champions, and, in 2010, the NBC Heads-Up Championship, taking home the $500,000 winner’s purse. As an industry advocate and proponent of online poker, she has appeared as an expert witness before the U.S. House of Representatives Judiciary and Financial Services committees. She also gained international recognition through her appearance on NBC’s Celebrity Apprentice in 2009, finishing as runner-up to Joan Rivers. She is the author of two other books, Annie Duke: How I Raised, Folded, Bluffed, Flirted, Cursed and Won Millions at the World Series of Poker, and Decide to Play Great Poker. Learn more about Annie at her website, www.AnnieDuke.com, or follow her on Twitter @AnnieDuke. Vanessa Rousso, one of the most visible women in poker, has won more than $3 million in poker tournaments, including more than $1 million at the €25,000 buy-in High Roller event of the PokerStars EPT in Monte Carlo, and more than $700,000 in the PokerStars World Championship of Online Poker Main Event, both in 2009. She also finished second to Huck Seed in the 2009 NBC Heads-Up Championship, winning $250,000. Learn more about Vanessa at her website, www.VanessaRousso.com, or follow her on Twitter @VanessaRousso. Josh Doody has extensively studied poker theory and has been a winning recreational player for 10 years, focusing primarily on no-limit hold‘em tournaments. Learn more about Josh at his website, www.JoshDoody.com, or follow him on Twitter @JoshDoody on Twitter.
Loading...
or
Not Currently Available for Direct Purchase