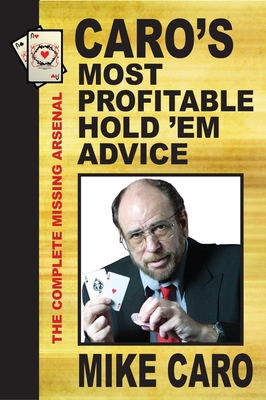 When Mike Caro writes a book on winning, the poker world takes notice. And it should: Caro is the world's foremost authority on poker theory and psychology, and his work has influenced every professional player including Doyle Brunson, who relied on Caro for Super System.

In this book the reader is going to journey far beyond the traditional tactical tools offered in most poker books and, for the first time, have access to the entire missing arsenal of strategies left out of everything they’ve ever seen or experienced in hold ’em. In the tradition of Doyle Brunson’s Super/System, which Caro helped Brunson create back in 1976 (and again in 2005 with Super/System 2), Caro reveals powerful, revolutionary strategies that have never been published in book form. Included are the rankings and anatomies of all 169 categories of hold ’em starting hands, exclusive material that was previously made available only to 800 world-class players and poker analysts.

Caro’s work is packed with hundreds of ground-breaking ideas, concepts, and powerful strategies, many of which will be new to players—they had never been made available to the general public before this book—and some they may have seen glossed over elsewhere. This exclusive advice represents Caro’s lifelong research into beating hold ’em.

MIKE CARO, the legendary “Mad Genius of Poker,” is the world’s foremost authority on poker strategy, psychology and statistics. He was the key contributor to both Doyle Brunson Super/Systems and the best-selling author of Caro’s Book of Poker Tells, the most widely quoted and influential poker book ever written.
Loading...
or
Not Currently Available for Direct Purchase