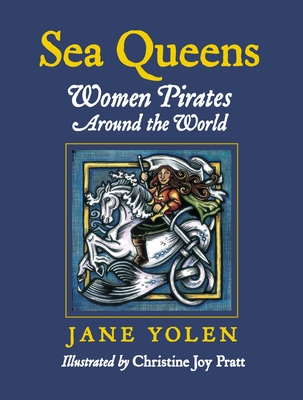 Woman Pirates Around the World

In 1963 Jane Yolen released a book called PIRATES IN PETTICOATS, because the idea of women as pirates fascinated her--but there wasn't much information about these women who made their livelihoods plundering on the high seas. Scholars have dug up a bounty of new information since then, and Jane, still fascinated, revisits the ladies who loot.

Discover such great pirates as Artemisia, the Admiral Queen of Persia who sailed the seas from 500 to 480 BC. At one point there was a 10,000 drachma prize for anyone who could capture her. There was Rachel Wall, who ran away from her strict upbringing and became a murderous pirate terrorizing the waters of the Atlantic coastline of America. She was hanged for her deeds. Possibly the most famous woman pirate of all was Grania O'Malley, daughter of an Irish chieftain. She plagued the English and was arrested several times, always gaining her freedom to pirate some more. Meet ten other female pirates on their ships, in battle, and in disguise in this intriguing look at the wayward women of the waves.

Christine Joy Pratt's pen-and-ink illustrations are alive with action and excitement. Here be a true and accurate account of the most low-down, scurviest--but the prettiest--black-hearted pirates you'll ever love to read about.

Jane Yolen is the award-winning author of nearly three hundred children's books, including BAD GIRLS, L:AST LAUGHS, SNOW,SNOW: WINTER POEMS (Boyds Mills), and THE ROGUES (Philomel). She has been called the Hans Christian Andersen of the Americas. Jane lives in Western Massachusetts and Scotland.
Loading...
or
Not Currently Available for Direct Purchase