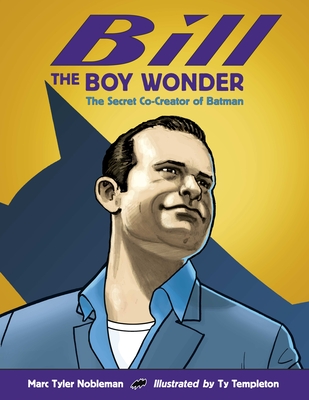 The Secret Co-Creator of Batman

Every Batman story is marked with the words, “Batman created by Bob Kane.” But that isn’t the whole truth. A struggling writer named Bill Finger was involved from the beginning. Bill helped invent Batman, from concept to costume to character. He dreamed up Batman’s haunting origins and his colorful nemeses. Despite his brilliance, Bill worked in obscurity. It was only after his death that fans went to bat for Bill, calling for acknowledgment that he was co-creator of Batman.

Cartoonist and popular Batman artist Ty Templeton brings Marc Tyler Nobleman’s exhaustive research to life. Perfect for reluctant readers and those bridging from easy readers to longer narratives, this classic underdog story will inspire all readers to take ownership of, and pride in, their work.

Marc Tyler Nobleman is the author of Boys of Steel: The Creators of Superman, which received multiple starred reviews and was named an American Library Association Notable Book. Due to discoveries Marc made in his research, the book also landed on the front page of USA Today. Marc never dressed as Batman for Halloween, but he was Robin twice (and Superman three times). Today, he lives with his family in Maryland. He reveals his research secrets and promotional gambles at noblemania.blogspot.com.
Loading...
or
Not Currently Available for Direct Purchase