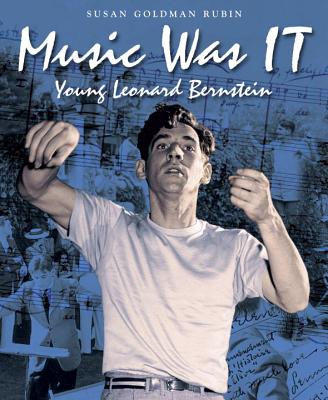 When Lenny was two years old, his mother found that the only way to soothe her crying son was to turn on the Victrola. When his aunt passed on her piano to Lenny’s parents, the boy demanded lessons. When Lenny went to school, he had the most fun during "singing hours."

But Lenny’s love of music was met with opposition from the start. Lenny’s father, a successful businessman, wanted Lenny to follow in his footsteps. Additionally, the classical music world of the 1930s and 1940s was dominated by Europeans—no American Jewish kid had a serious chance to make a name for himself in this field.

Beginning with Lenny’s childhood in Boston and ending with his triumphant conducting debut at Carnegie Hall with the New York Philharmonic when he was just twenty-five, MUSIC WAS IT draws readers into the energetic, passionate, challenging, music-filled life of young Leonard Bernstein.

Archival photographs, mostly from the Leonard Bernstein Collection at the Library of Congress, illustrate this fascinating biography, which also includes a foreword by Bernstein’s daughter Jamie. Extensive back matter includes biographies of important people in Bernstein’s life, as well as a discography of his music.

Susan Goldman Rubin is the author of more than a dozen books for young readers, including ANDY WARHOL: POP ART PAINTER (Abrams) and THE CAT WITH THE YELLOW STAR: COMING OF AGE IN TEREZIN (Holiday House), both ALA Notable Books. Susan lives in Malibu, California.
Loading...
or
Not Currently Available for Direct Purchase