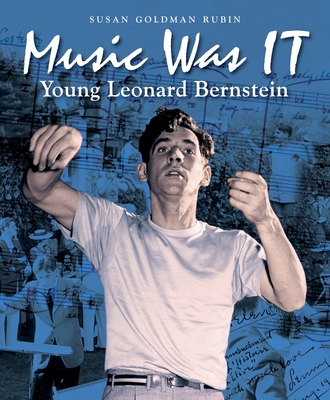 Beginning with Lenny’s childhood in Boston and ending with his triumphant conducting debut at Carnegie Hall with the New York Philharmonic when he was just twenty-five, Music Was IT draws readers into the energetic, passionate, challenging, music-filled life of young Leonard Bernstein. Archival photographs, mostly from the Leonard Bernstein Collection at the Library of Congress, illustrate this fascinating biography, which also includes a foreword by Bernstein’s daughter Jamie. Extensive back matter includes biographies of important people in Bernstein’s life, as well as a discography of his music.

Praise For Music Was IT: Young Leonard Bernstein…

"...highly readable and inspiring..." - Booklist, starred review "An impeccably researched and told biography of Leonard Bernstein’s musical apprenticeship, from toddlerhood to his conducting debut with the New York Philharmonic at age 25."
--Kirkus Reviews, starred review "Rubin spins [Leonard Bernstein's] biography into a tale that reads as smoothly and compellingly as a novel."
--The Bulletin of the Center for Children's Books * A Junior Library Guild Selection

* YALSA Award for Excellence in Nonfiction for Young Adults finalist

Susan Goldman Rubin is the author of more than a dozen books for young readers, including Andy Warhol: Pop Art Painter (Abrams) and The Cat with the Yellow Star: Coming of Age in Terezin (Holiday House), both ALA Notable Books. Susan lives in Malibu, California.
Loading...
or
Not Currently Available for Direct Purchase