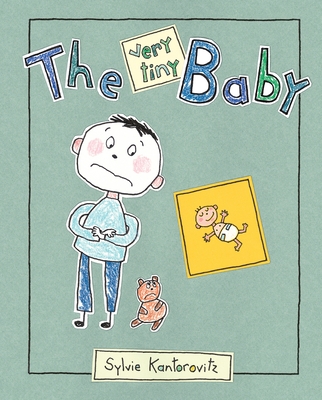 What happens when a baby comes too early?

Jacob is not sure he's happy about the new baby. When his new sibling is born prematurely, Jacob discovers a terrible secret: adults can be scared, too. While he has his grandma and his faithful teddy bear, Bob, with him at home while his parents are at the hospital, he still feels alone and full of questions that his Grandma can't answer.

Portraying the range of emotions older siblings often have about a new baby, including fear, anger, and resentment, The Very Tiny Baby also touches on the added challenges of preemie health concerns and parents’ frequent absences.

Sylvie Kantorovitz drew upon her experiences as a sister and mother when writing The Very Tiny Baby. When she was three years old, her brother was born much too early, and many years later her own daughter started life as a very tiny preemie. Both brother and daughter are well, thank you. Sylvie is illustrator of Go to Bed, Monster! (Harcourt, 2007) and the Little Witch series (Random House), and the author/illustrator of I Love You, Mister Bear (HarperCollins, 2003). She grew up in France and now lives in Albany, New York.

Praise For The Very Tiny Baby…

*Just because a book fills a need, that doesn't guarantee its quality; fortunately, this book both addresses premature birth and succeeds marvelously.

Like any big brother-to-be, Jacob is conflicted when he hears about his family's upcoming arrival. Sure, he's excited, but teddy bear Bob, clearly Jacob's externalized id, is unafraid to bring up potential problems. Bob's worries are utterly forgotten, however, when the infant arrives far too early, and the grown-ups' fear communicates itself to Jacob. As time wears on, Jacob feels abandoned; all his parents and grandmother think about is their preemie. Reminiscent of the straightforward honesty of a Robie H. Harris title, the storyline doesn't coddle the viewer but acknowledges feelings, both good and bad. From conversations about what's going to happen ("Is the baby going to die? Grandma didn't know") to anger toward the baby itself (a black page contains just an image of Jacob and the words "I wish the baby would die"), Kantorovitz draws on personal experience to give a rounded view of the situation. Images are laid out like snapshots in a family album, drawn in the faux-naif style of Jacob himself, and his childlike narration is printed in a typeface that emulates a child's handwriting. This filter helps to blunt the potential horror even as it honors Jacob's emotions and experiences.

Jacob’s parents are excited about their expected baby, but the child isn’t so sure he wants to share the limelight. Then when the infant arrives too early and everyone--even grandma--is so preoccupied with its survival that they don’t pay much attention to him, he’s certain that the new baby is a bad idea. When the baby improves and eventually comes home, though, Jacob, assured of his parents’ love, is ready to assume his roles as big brother and helper. The hand-lettered text appears in several framed rectangles of varying sizes on each page. Most rectangles contain ink drawings colored with gouache and pencils. Although text and illustrations have a childlike quality, the story doesn’t gloss over how fragile life is for preemies, the anxieties experienced by family members, and even the complaints, often expressed here through the mouth of his stuffed bear, of a sibling who feels left out. A striking example is the solid black rectangle covering a page on which Jacob declares, “I wish the baby would die.” Pumping of breast milk, hospital visit precautions, and care of preemies are all depicted. This story can provide information and comfort to youngsters experiencing worry about a sibling born prematurely or even for those who are preparing to share parents with a new brother or sister.
-School Library Journal

Jacob's parents are expecting a baby, but the usual older-sibling storyline takes on a more serious turn when the baby arrives much too early, ending up in the NICU and sending the family into a tailspin of anxiety and disruption. When Jacob's parents turn all of their attention to the needs of the preemie, Jacob's feelings of frustration rapidly evolve into feelings of anger ("I am thinking mean thoughts. I think the baby is ruining my life. I think we should give the baby away. I wish the baby would die"). Even when danger passes, the baby must stay in the hospital, requiring Jacob's mother to pump breast milk (while Jacob covers his ears in frustration at the noise of the machine). Finally, the baby comes home, and while still a bit uncertain, Jacob appears mostly ready to welcome his tiny sibling. This is not a book to accidentally hand to an unsuspecting soon-to-be older sibling, but it's a frank look at a common life situation not usually addressed for this age; Kantorovitz deals with Jacob's very real and intense emotions with unusual honesty and a keen sense of child perspective. The pen, pencil, and gouache illustrations mimic a child's drawing style, and they're laid out with hand-lettered text captions in sequential bordered panels against contrasting backgrounds, as if they were in Jacob's scrapbook. Introduced in the right context and with the right amount of adult support, this could prove a useful story to families in a similar situation; consider purchasing this for your parent shelf rather than your picture-book collection.
-The Bulletin of the Center for Children's Books
or
Not Currently Available for Direct Purchase
Copyright © 2020 American Booksellers Association