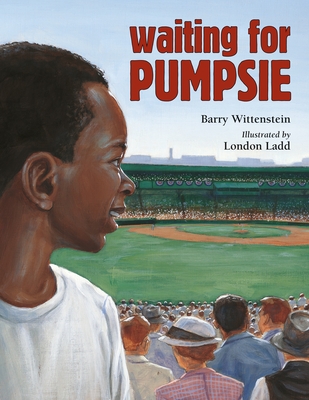 In 1959 the Boston Red Sox was the last team in the Major Leagues to integrate. But when they call Elijah “Pumpsie” Green up from the minors, Bernard is overjoyed to see a black player on his beloved home team. And, when Pumpsie’s first home game is scheduled, Bernard and his family head to Fenway Park. Bernard is proud of Pumpsie and hopeful that this historic event is the start of great change in America.

This fictionalized account captures the true story of baseball player Pumpsie Green’s rise to the major leagues. The story is a snapshot of the Civil Rights Movement and a great discussion starter about the state of race relations in the United States today.


"This uplifting account of a family and the integration of Boston baseball will be inspiring to many youngsters." — School Library Journal


"This picture book contributes to children's understanding of America's past, while telling a good story"— Booklist

Praise For Waiting for Pumpsie…

Bernard is a huge fan of the Boston Red Sox, but the young black boy wonders when they will field a player who looks like him. Every year he and his family see a game at Fenway, though they don't always feel welcome there. Jackie Robinson has retired, and all the other Major League Baseball teams have African-American players. Even basketball's Boston Celtics and hockey's Boston Bruins have integrated, but the Red Sox owners continue to resist. Spring training 1959 brings a ray of hope. Pumpsie Green has a chance at making the team. But he is deemed "not ready." After fan protests, newspaper editorials, and a drop into last place, Pumpsie is finally called up to the Red Sox. Bernard attends Pumpsie's first game at Fenway, acutely aware that he is witnessing history. Pumpsie will never be a star but has a solid journeyman career. Wittenstein is scrupulously accurate in his portrayal of time, place, baseball, and characters real and imagined, allowing Bernard to narrate in the language of the 1950s, speaking directly to readers in an earnest, joyous voice that resonates with emotion. Ladd's wonderfully detailed acrylic-and-colored pencil illustrations powerfully and beautifully complement and enhance the events. The family glows with personality, and the baseball scenes are spot-on. Bernard is innocent, aware, and endlessly hopeful and will win readers hearts. A grand slam.
—Kirkus Reviews, starred review

Even after Jackie Robinson broke the color barrier, other hurdles remained for black professional baseball players. It's something that Bernard, the young African-American narrator of Wittenstein's first picture book, is acutely aware of. "How come the Giants got Wille Mays, and Jackie Robinson retired from the Dodgers, but we still don't have a Negro player?" Bernard, a devoted Red Sox fan, asks his father. A promising minor leaguer, Pumpsie Green, finally gets a shot to play, but it's no easy road; the Red Sox, Wittenstein explains, were the last major league team to intergrate, in 1959. The racism that Green was up against is evident in Wittenstein's story and in Ladd's (Fredrick's Journey) expressive, dramatically framed acrylics; at Fenway, Bernard and his family are told to "Sit down and shut up" by a white fan and then scolded by a policeman. Bernard's conversational narration creates a warm bond with readers from the get-go, and although Wittenstein and Ladd never sugarcoat instances of racial prejudice, the story's moments of triumph sound the loudest notes.
—Publishers Weekly

It's 1959. Growing up in an African American family of avid baseball fans, Bernard loves almost everything about the Red Sox, from listening to games on the radio to cheering on the players at Fenway. What's not to love? Well, there's the fact that some folks in the stands make rude, racist remarks and the injustice that—12 years after Jackie Robinson "broke the color barrier"—the team has never fielded a black player. Finally, under pressure, management hires Pumpsie Green. The story ends on a high note, with everyone celebrating as Green contributes to a Red Sox win. Weaving in facts, emotions, and perspective, the first-person text makes it easy to empathize with Bernard's point of view. The acrylic and colored-pencil illustrations feature good characterizations, strong compositions, and dramatic ball-park scenes. A closing author's note fills in some baseball history. With its tacit acknowledgement that social change is a slow process and that racism was not confined to the South, this picture book contributes to children's understanding of America's past, while telling a good story.
—Booklist

In 1959 Boston, a young African American baseball fan named Bernard anxiously waits for the Minor League player Pumpsie Green to join the Red Sox. It is the last team with an all-white lineup, but change is in the air. Bernard and his family continue to face racial discrimination from white fans and policemen at Fenway Park when they attend games. But after the boy and his family hear Pumpsie's name announced on the radio, they later go to a game to root for the new player. This story is not so much about Pumpsie Green (who goes on to a short career with the Red Sox) as it is about a family longing for an end to segregation and discrimination. The joy that comes when they enjoy a small victory with their favorite team's integration is palpable though subtle and is the real center of the narrative. The vibrant illustrations in acrylic paint complement and enhance the text, making readers feel a part of the tale.
This uplifting account of a family and the integration of Boston baseball will be inspiring to many youngsters.
—School Library Journal

Barry Wittenstein has worked at CBS Records, CBS News, and was a web editor and writer for Major League Baseball. He is now an elementary-school substitute teacher and children's author. This is his first book for children. Barry lives in New York, New York.

London Ladd is the illustrator of Under the Freedom Tree by Susan VanHecke, Oprah: The Little Speaker by Carole Boston Weatherford (Two Lions), and March On!: The Tay My Brother Martin Changed the World by Christine King Farris (Scholastic). London lives in Syracuse, New York.
Loading...
or
Not Currently Available for Direct Purchase