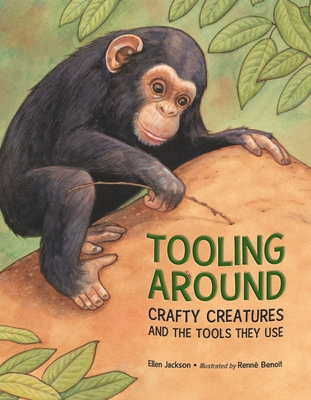 Crafty Creatures and the Tools They Use

We all use tools every day: a pen to write a story, a paint brush to illustrate a book, a fork to eat dinner. But it's not just humans who use tools.

Chimpanzees often poke sticks, straw, or blades of grass into termite mounds to draw out insects for a tasty treat. Veined octopuses have been observed carrying coconut shells—they crawl inside them and hide from predators when they need a rest. A New Caledonian crow can even bend a twig with its beak to use as a hook to dig out bugs.

Scientists don't all agree on what counts as a tool, but young readers will be inspired to observe the animals that live around them and how they use various objects to find food, to attract a mate, to protect themselves, or to build or conceal a home.

Renné Benoit's illustrations get closeup with each animal, exploring habitats, the special problems they face, and the ways they solve these problems—either by intelligence or instinct. Tooling Around: Crafty Creatures and the Tools They Use is a wonderful introduction to the animal kingdom and the many different ways animals survive.

Praise For Tooling Around: Crafty Creatures and the Tools They Use…

Upbeat, if somewhat corny, rhymes help introduce ways in which 11 wild animals utilize tools. Subjects include a crow that bends a piece of wire to reach an object, otters that use rocks to smash open shellfish, and dolphins that use sea sponges to catch fish: "Dolphins choose a cone-shaped sponge,/ wrap their beaks, then fish and lunge." Longer prose passages elaborate on each animal's activity: "Elephants strip leaves from branches," writes Jackson. "They use the stripped branches to swat flies or other insects that bite them." Benoit's mixed-media illustrations fall between naturalistic and cozy, creating an accessible entry point to learning about animal behavior. An author's note provides additional background on animals' tool use and the habitats of the featured animals.
-Publishers Weekly

Woodpecker finches, chimpanzees, otters, deer, and octopuses are just some of the animals whose use of tools is explored in this attractive, informational picture book. Rhyming couplets paired with explanatory paragraphs in succinct, descriptive prose explain how various species use objects to accomplish specific goals. A helpful introduction explains what a tool is, defining it fairly broadly ("Many scientists who study animal tool use define a tool as an object that an animal uses to accomplish a goal"): the book uses some clear examples (a chimp using sticks and straws to obtain termites, otters using rocks to crack shells) as well as less obvious ones (squirrels kicking rocks and sand at a snake, male red deer covering their antlers with mud or grass to attract mates). Soft watercolor, pencil, and gouache illustrations depict the animals realistically. This book allows for a rich, up-close look at a fascinating aspect of animal behavior, and while the use of tools is the primary focus, the pictures will also enhance discussions around animal habitats as well. The rhyming portions make this title ideal for reading aloud with younger children, while the more in-depth explanations allow for engaging independent reading by older kids. An author's note goes into further detail about tools, and the bibliography and additional resources showcase some solid books and websites for kids. Useful for instructional purposes and accessible enough for students to read on their own.
-School Library Journal

Sure, people use tools, but animals? On each double-page spread of this attractive picture book, Jackson introduces a species that will surprise readers with its inventiveness and adaptability. Short, rhyming verse introduces the ideas, while a large-scale picture illustrates them, and a few sentences explain what the animal is doing and why. For example, the rhyme "Otters on an ocean swell / use a rock to crack a shell" accompanies images of otters swimming, picking up a rock, and dining on the mullusk inside, while the short prose text comments on what's happening. Also featured are a woodpecker finch, chimpanzee, crow, deer, and elephant, among others. An author's note discusses scientists' ongoing discussion of animal tool use. Benoit's appealing artwork, created with watercolor, colored pencil, and gouache, illustrates the animals' unusual behaviors with warmth, color, and attention to detail. An intriguing idea presented in an accessible way.
-Booklist

Ellen Jackson has written and published many fiction and nonfiction books for children. She is the author of the award-winning Turn of the Century, Cinder Edna, and The Ballad of the Booster Bogg, among others. Ellen lives in California with her Miniature Schnauzer, Bailey. She writes almost every day. You can visit her online at EllenJackson.net.

Renné Benoit is the illustrator of several picture books, including Mooncakes, The Secret of the Village Fool, and Proud as a Peacock, Brave as a Lion. Renné lives in Ontario, Canada.
Loading...
or
Not Currently Available for Direct Purchase