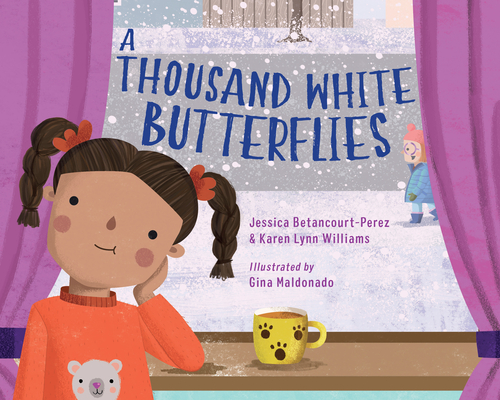 As if being new to the United States wasn't hard enough, Isabella's first day of school is canceled due to snow!

Isabella has recently arrived from Colombia with her mother and abuela. She misses Papa, who is still in South America. It's her first day of school, her make-new-friends day, but when classes are canceled because of too much snow, Isabella misses warm, green, Colombia more than ever. Then Isabella meets Katie and finds out that making friends in the cold is easier than she thought!

Praise For A Thousand White Butterflies…

♦ Isabella is excited for her first day of school in a new country, because she knows it means making new friends. She misses those she left behind in Colombia, not to mention her father, who is waiting for permission to join Isabella, her mother, and her grandmother in the U.S. On the much-anticipated day, Isabella wakes up early only to be confronted by snow blanketing the ground and fluttering through the air like butterflies. When she learns that school is canceled, she is heartbroken. As she sits by the window, Isabella sees a young girl fall in the snow. Isabella quickly puts on her coat and boots and runs outside, where she finds the girl is actually making a snow angel. The girl invites Isabella to join her. “I don’t know all her words,” Isabella narrates, “but I understand enough.” She happily flops onto the snow and helps her new friend build a snowman, complete with sombrero vueltiao and rauna (poncho). Drawing upon Betancourt-Perez’s immigration experience, this story contains many of the emotions children may feel when settling into life in a new country. Instead of portraying Spanish as a linguistic barrier for Isabella, the cheerful illustrations (created with crayon, acrylic paint, and Photoshop) show how the girls’ fun transcends this difference. A glossary of Spanish words and an author’s note further enrich this heartwarming story.
—Booklist, starred review

There’s a lot to look forward to on the first day of school, but not necessarily for Isabella. She’s recently immigrated from Colombia to the United States with her mother and grandmother. Her father is still in South America, “waiting for permission to travel.” Isabella’s family doesn’t have a firm grasp of English yet, but she is hopeful, preparing her outfit and a fresh box of crayons that she will share with all of her new friends on the big day. Then a snowstorm wipes all of Isabella’s hopes away. The school is closed. Her one chance at making a connection in this unfamiliar land is gone. Will a chance encounter with another girl outside in the dazzling white turn everything around? The authors craft a simply told, tenderhearted tale of friendship found when least expected. Spanish dialogue is woven seamlessly into the story, bolstered by contextual clues that will allow nonfluent readers to understand the text. Language dissonance and culture shock, more than snowstorm, are at the heart of Isabella’s conflict, and the authors beautifully demonstrate how children are able to see each other for who they really are when given the chance. Maldonado’s cheery illustrations are appropriately rendered in crayon and acrylic paint; Isabella herself is an inveterate crayon artist. The authors also include enlightening notes regarding their own family histories and writing partnership, as well as a glossary of Spanish terms appearing in the text. ­VERDICT A sweet and gently poignant title that would make a lovely addition to collections underscoring the hopeful side of the immigrant experience.
—School Library Journal

A recently arrived child from Colombia misses her father and her friends back home, so she looks forward to her first day of school and making new friends.
As Isabella looks out the window, the world outside feels strange, and “the United States is cold and gray.” Her mother assures her she will make new friends in school. Eagerly anticipating the first day of school, Isabella readies her new jeans and “fluffy orange sweater” as well as her school supplies. But when her “make-new-friends day” finally arrives, it is snowing and school is cancelled. With her dreams of new friends dashed, Isabella stares out the window where the snow looks like “a thousand white butterflies.” When she sees a girl fall in the snow, Isabella runs out to help only to discover the girl grinning—she has just made a snow angel. After spending a day playing outside, making more angels and building a snowman, Isabella is delighted. She has made a friend. Maldonado’s charming illustrations are simple and colorful, depicting a brown-skinned girl with two cute little braids sticking out on either side of her head. Katie, Isabella’s new friend, wears glasses and has pale skin and straight red hair. The story is a little bland and predictable, which lends it a sweet and reassuring feel. Many a newly arrived child will recognize Isabella’s homesickness and need for reassurance that life will work out in this new country. Isabella narrates in English, the dialogue within her family entirely in Spanish; the fact that she and Katie speak only in their own languages interferes not a whit in their play
An encouraging story of new beginnings.
—Kirkus Reviews

Gina Maldonado studied architecture and interior design in Colombia, Mexico, and Italy and then discovered her real passion--illustration. www.cocogigidesign.com
Loading...
or support indie stores by buying on