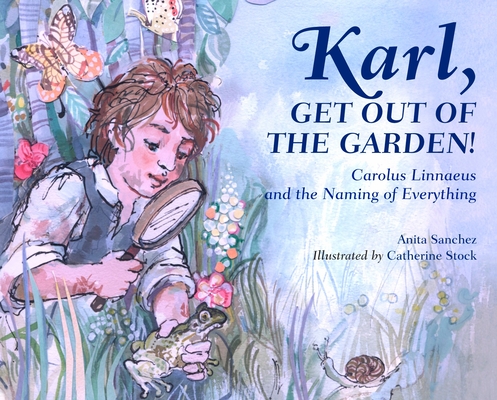 Karl, Get Out of the Garden!

Carolus Linnaeus and the Naming of Everything

Carolus (Karl) Linnaeus started off as a curious child who loved exploring the garden. Despite his intelligence—and his mother's scoldings—he was a poor student, preferring to be outdoors with his beloved plants and bugs. As he grew up, Karl's love of nature led him to take on a seemingly impossible task: to give a scientific name to every living thing on earth. The result was the Linnaean system—the basis for the classification system used by biologists around the world today. Backyard sciences are brought to life in beautiful color.

Back matter includes more information about Linnaeus and scientific classification, a classification chart, a time line, source notes, resources for young readers, and a bibliography.


A handsome introductory book on Linnaeus and his work — Booklist, starred review

Praise For Karl, Get Out of the Garden!: Carolus Linnaeus and the Naming of Everything…

Fascinated by plants from an early age, Karl Linné, better known today as Linnaeus, preferred the garden to the schoolroom. Later, he chose to study medicine, a discipline that, in the early 1700s, often relied on plants for healing. And in that pursuit, he found his calling. Realizing that the many different names used for each plant were making it difficult to communicate about which specific one might cure an ailment, Linnaeus decided to name every plant and animal, and he set up an organized system to classify them. Though controversial in its day, it became the standard system of scientific classification and nomenclature, and it survives in modified form today. An environmental educator and the author of Leaflets Three, Let It Be (2014), Sanchez writes clearly about the challenges, rewards, and significance of Linnaeus’s work in the main text, leaving details about his family and the later evolution of his classification system to the informative back matter, which includes sources for the quotes appearing alongside many of the illustrations. Featuring a profusion of plants and animals and incorporating quotes from the famous naturalist, Stock’s expressive artwork brightens every page. A handsome introductory book on Linnaeus and his work.
—Booklist (STARRED REVIEW)

Carolus Linnaeus (née Karl Linné) pioneered a classification system for living things that is, for the most part, still in use today. In this imaginative portrayal of the scientist's life, from a child curious about the plants and animals of his backyard in Sweden to a famous and beloved—and opinionated—naturalist and teacher, Linnaeus's enthusiasm and dedication to systematic and organized investigation of the natural world come through. Here was a boy, then man, who delighted in careful observation of the features of organisms and spent a lifetime designing and popularizing a method to categorize them. Sanchez takes readers step-by-step through Linnaeus's process, including the decisions he made about how to separate and group organisms, some of which, such as where to place Homo sapiens, highlight the controversies of the day. In Stock's lush illustrations, the plants and animals of Sweden and the world surround Linnaeus from infancy to old age: sunny fields of wildflowers, rooms filled with dried herbs and specimens, and the beautiful gardens and homes. Endnotes explain more about Linnaeus's later years and today's classification systems and provide a biographical timeline.
—The Horn Book

Born in 1707, Karl Linné was an inquisitive child who enjoyed the outdoors, loved plants, and wanted to know the names for everything. He discovered that scientists, farmers, and doctors tended to disagree with one another about the naming of flora and fauna—the same plant might have several different titles. Linné wanted to bring order to this chaos, so he set out to create a convention from which to designate plants and animals. Linné classified and named more than 12,000 species of plants and animals, and his Latin classification system was accepted and used by scientists across the globe. What had seemed an insurmountable task was completed by Linné, portrayed here as a figure with a boundless imagination and fascination for nature. In 1757, he was knighted by the king of Sweden and thus gave himself a new name, Carolus Linnaeus. Stock’s impressionistic pen-and-ink and watercolor illustrations are subdued, with spots of bright color, and adeptly match the content and the tone of the work. VERDICT The biographical approach to a knotty scientific subject makes this a valuable addition to STEM and biography collections.
—School Library Journal

An inveterate nature lover classifies plants and animals—and changes the world of science forever. Even as a tiny child in 18th-century Sweden, Karl Linne adored spending time in his family's garden. As he grew, he examined plants and bugs for hours while avoiding the stuffy confines of the schoolroom. As a medical student learning to use his beloved plants as remedies, he realized how chaotic "scientific" nomenclature really was at the time: no one agreed on specific names for plants and animals, nor was there even much general consensus about what type of living thing was what. Determined to bring order to the madness, Linne set out to classify the world's known plants and animals by giving each a "clear and simple name"—hardly an easy task given the vast diversity of living things. Yet classify life forms Linne did, in his usual painstaking way. Later in life, as a revered scientist, he "classified" even himself by adopting the—what else?—Latin name "Carolus Linnaeus," the name by which he is still known to this day. This is an interesting, clearly written, and accessible biography about a major yet lesser-known figure who revolutionized scientific thought. The charming pen-and-ink and watercolor illustrations are bright and cheerful and work well with the narrative. A good introduction to a man in a class by himself.
—Kirkus Reviews

Even as a baby in Sweden, Karl Linné (later Carolus Linnaeus) was drawn to bugs and plants; as he grew older, the system of nomenclature he's known for came about because of practical reasons: "He studied hard and soon began using his beloved plants to cure people's ailments. There was just one problem. Which plant was which?.... Some plants had thirty or forty different names!" Stock (Emily and Carlo) works in scraggly pen, ink, and watercolor, befitting the mood of Linnaeus's "exciting, rowdy field trips into the woods and meadows—expeditions with hundreds of students, lasting from morning till night." Sanchez (Leaflets Three, Let it Be!) lends significant humanity to the naturalist, whose scientific contributions are now so familiar, they are easy to take for granted.
—Publishers Weekly

Here's a delightful book for children ages 7-10 about the life and word (i.e., fun) of Carolus Linnaeus. A poor student who was bored in school, Linnaeus was happiest outdoors — including his parents' garden — and he always wanted to know the names of plants and animals. Sanchez writes that his parents hoped he would become a scholar, lawyer, minister, or shoemaker. Fortunately for sciences, one of his teachers who noted his love of plants suggested that he become a doctor, using plants as medicine. The rest is nomenclature... and Sanchez describes how Linnaeus traveled and studied and named things, sometimes fighting with the scientific establishment — and naming a foul-smelling weed after one such "idiot and fool." The writing and illustrations are wonderful — just right for a young child who is as curious about nature as was Linnaeus.
—The Maine Organic Farmer & Gardener

Anita Sanchez is the author of the picture book Leaflets Three, Let it Be!: The Story of Poison Ivy (Boyds Mills), as well as botany and history books for adults. She has taught classes and given workshops on nature and history at the American Museum of Natural History, Colonial Williamsburg, Harvard Natural History Museum, and the New York State Museum. She lives in Amsterdam, New York.

Catherine Stock is the illustrator of more than eighty children's books, including Emily and Carlo and Vinnie and Abraham. After traveling around the globe, she now divides her time between France and New York.
Loading...
or support indie stores by buying on