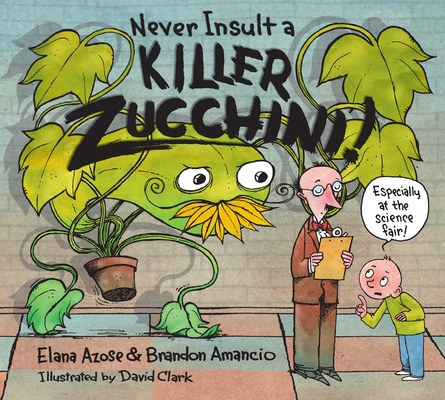 This is one science fair you’ll never forget!

When Mr. Farnsworth, the science-fair judge, declares that he loves zucchinis, the Killer Zucchini is smitten. As the judge makes his way through the exhibits alphabetically—A (antimatter), B (bionic limb), C (cloning)—the Killer Zucchini tries to show his affection. But when Mr. F gets to K and admits he likes to eat zucchini with ranch dressing, the Killer Zucchini gets steamed and attempts to exact his revenge on the snack-loving judge using the other science-fair projects as his means to an end.

Hilarious havoc ensues as the entire science fair is destroyed by his wrath.

Engaging backmatter provides the science behind the science fair entries created by the characters in the story.

BRANDON AMANCIO develops software and designs his own video games. He lives in Kirkland, WA. This is his first picture book.

DAVID CLARK is the illustrator of more than fifteen books for children, including Fractions in Disguise, What’s for Dinner? Quirky, Squirmy Poems from the Animal World, and Pirate Bob. David lives in Luray, Virginia.
Loading...
or
Not Currently Available for Direct Purchase