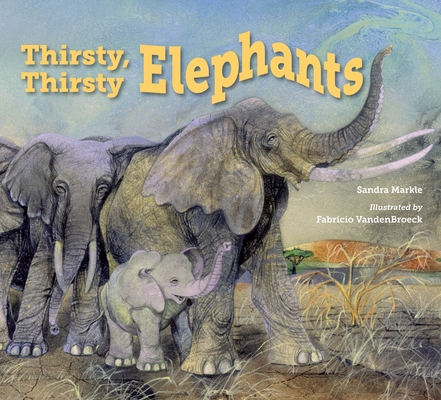 During a drought in Tanzania, Grandma Elephant is in search of water for her herd. Little Calf follows along and mimics her grandmother at each stop on their journey. When Grandma leads them to a watering hole she recalls from years before, the elephants are overjoyed and Little Calf splashes about with her tender leader. Grandma's persistence and powerful memory is something Little Calf will never forget. Based on true events.

Back matter includes further information about the phenomenon of a herd of elephants that survived a drought, as well as fascinating elephant facts.

Sandra Markle is an award-winning author of more than two hundred nonfiction books for children, including What If You Had Animal Teeth? (Scholastic), Toad Weather (Peach Tree), Little Lost Bat and A Mother's Journey. She lives in Lakewood Ranch, Florida.

Fabricio VandenBroeck has illustrated several books for children, including The Mouse Bride (Alfred A. Knopf), The Witches Face (Holiday House), and Under the Mamboo Moon. He lives in Mexico.

As drought dries up the usual sources of water for elephants in Tanzania, Little Calf's grandmother relies on her memory to lead the elephants to a new source."It's a hot, dry day in Tanzania. Grandma elephant stops munching leaves. Thirsty, she lifts her trunk high and takes a deep SNIFF! Grandma smells water in the distance and sets off." The accessible, fact-packed language continues, as does the gentle humor provided by Little Calf, who is still learning how to effectively use her trunk. The story is not without suspense, as place after place offers little or no water to the herd that follows Grandma. Little Calf even collapses at one point, but her mother revives her quickly and cleverly, keeping her shaded after that. Colorful, mixed-media illustrations are a perfect match to the thoughtful text. Details range from the parched ground to tropical birds; from distant gazelles to the up-close, leathery skin of elephants in many positions and moods. According to the author's note, the tale is based on a hypothesis that the reason one particular elephant herd managed so well during a 1994 drought rested squarely on their elderly leader. She apparently used her childhood memories of surviving an earlier drought to lead her herd to that same, still-available watering hole. Further elephant facts and resources round out the backmatter. A fresh, winning blend of natural science, simple storyline, tenderness, and perseverance.
—Kirkus Reviews, starred review

A herd of African elephants searches for water on the dry savanna in Markle (Toad Weather) and VandenBroeck's (Whiskers, Tails & Wings) handsome picture book. Based on a true story of a Tanzanian herd that survived a 1994 drought thanks to its leader, named Big Mama by researchers, this account describes how Grandma elephant, like Big Mama, locates water for her charges. "Grandma's thirst stirs a memory of a dry time long ago, when she was a baby," Markle writes. "She remembers another watering hole and sets off to find it." On the way, the herd munches leaves, digs up the cracked surface of an old watering hole, and even uses saliva to cool the youngest. Realistic watercolor and acrylic illustrations alternate between close-ups of the parched parade of pachyderms and the wider landscape, painted in layered, textured hues. Readers will breathe a sigh of relief when the watering hole finally appears and the herd frolics and drinks its fill. This tale of a lifesaving trek wraps up with an author's note about Big Mama, additional elephant facts, and suggested resources.
—Publishers Weekly

A herd of elephants led by Grandma Elephant are looking for water during a long drought in Tanzania. As the dry spell drags on, their efforts get more and more desperate. The intense thirst triggers a memory for Grandma Elephant of a long-ago drought that she lived through as a young calf. As Grandma Elephant leads Mama, Little Calf, and the rest of the herd in search of the water source from her memory, Little Calf collapses from thirst and exhaustion. Mama Elephant revives the little one by using her own saliva to cool Little Calf off enough to keep going. “The thirsty, thirsty elephants walk on, slowly.” Grandma finally smells what she’s been seeking. Readers will be rooting for Grandma, Mama, Little Calf, and the rest of the herd the whole way. VandenBroeck’s colorful acrylic and watercolor illustrations depict the herd and other wildlife with full-spread, panoramic views and will keep readers engaged in the drama of the story. An author’s note explains that the tale was inspired by an actual elephant, Big Mama, who 30 years earlier lived through a similar drought when she was a calf and then, according to researchers, went on to lead her herd to a water source during a 1994 drought in the Tarangire National Park area of Tanzania. In addition to the note, an “Amazing Elephant Facts” and “Digging Deeper” sections are included. VERDICT Lending itself well to read-alouds, this is an enjoyable addition to preschool and elementary picture book collections looking for stories inspired by actual animals and events.
—School Library Journal
or
Buy Here
Copyright © 2020 American Booksellers Association