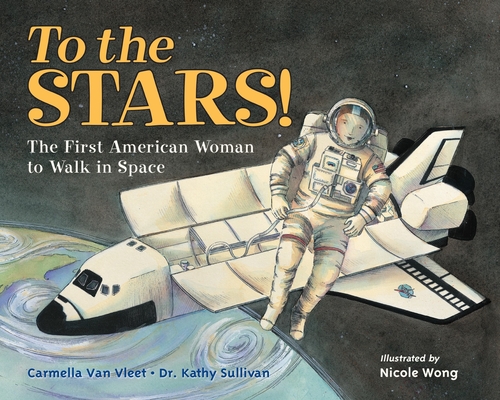 To the Stars! (Hardcover)

The First American Woman to Walk in Space

Kathy Sullivan wanted to go everywhere. She loved blueprints and maps. She loved languages and the ocean. She didn’t like the question, “What do you want to be when you grow up?” She wanted to explore and do exciting things that girls weren’t supposed to be able to do. Only men had the exciting jobs.

Kathy liked fishing and swimming; flying planes and studying science. That’s what she liked and that’s what she decided to do with her life. She followed her heart and eventually became a NASA astronaut and the first woman to walk in space. Kathy wanted to see the whole world and so she did: from space!

Backmatter includes further information about Dr. Sullivan and her career, as well as other famous firsts made by women astronauts.

Carmella Van Vleet is the author of many hands-on science and history books and the middle-grade novel Eliza Bing Is (Not) a Big, Fat Quitter (Holiday House). To the Stars! is her first picture book.

Dr. Kathryn Sullivan is a distinguished scientist and renowned astronaut. She was one of the first six women selected to join the NASA astronaut corps in 1978 and holds the distinction of being the first American woman to walk in space. Dr. Sullivan flew on three shuttle missions during her fifteen-year tenure, including the mission to deploy the Hubble Space Telescope. She was confirmed by the Senate as the Under Secretary of Commerce for Oceans and Atmosphere and NOAA Administrator in 2014.

Nicole Wong has illustrated many books for children, including No Monkeys, No Chocolate; Maxwell's Mountain; Wild Rose's Weaving (Tanglewood Press); and "L" Is for Library (Upstart Books).

Praise For To the Stars!: The First American Woman to Walk in Space…

This biography of Kathy Sullivan joins the ranks of picture books about women who have taken to the air.
Her name is not familiar to most people, yet her achievements were major. As a child, she dreamed of having a pocketful of airplane tickets so she could see the whole world. Unlike her female friends, she wanted to be an adventurer, like a spy or a diplomat. She ignored the taunts ("Girls don't like those jobs"), and when she was a teenager, she learned to be a pilot. Attractive watercolor-and-ink illustrations visually use alternating, double-page spreads to show how, throughout her childhood and young adulthood, her determination became the impetus for her adult challenges. This back-and-forth perspective, between childhood and adulthood, is effective for the age group. In 1978, she became one of the first six women selected to join NASA, and she was the first American woman to walk in space, in 1984. Notes, each a full page long, from the author and Sullivan herself encompass her adventurous spirit and encourage girls to "set big goals." Concluding thumbnail biographies profile 13 other woman astronauts, including Sally Ride, Kalpana Chawla, Mae Jemison, and Ellen Ochoa.
This welcome addition to the field of female fliers will be informative as well as inspirational for girls.
-Kirkus Reviews


Astronaut Sullivan collaborates with Van Vleet to recount her path to becoming the first American woman to walk in space, while aboard the Challenger shuttle in 1984. In one scene, a young Sullivan dives into a lake, while on the following spread she's seen working on deep-sea-submersibles as an adult. Wong's lemony ink-and-watercolor illustrations picture Sullivan as calm and curious, and her decision to pursue exactly what interests her ("I know what I love, and I'm just going to follow that compass") may encourage readers to give more credence to their own aspirations. Extensive endnotes offer additional details about Sullivan's life and accomplishments, as well as those of other pioneering female astronauts.
-Publishers Weekly


This biographical picture book presents astronaut Kathy Sullivan, who, in 1984, became "the first American woman to walk in space." Double-page spreads featuring scenes from her youth alternate with those showing her adult years, while the succinct text uses thematic links to draw pairs of illustrations together. For instance, on one spread Kathy is doing a cannonball dive into the pool, while on the next she is an astronaut doing underwater training. Learning to fly, teenage Kathy looks at the dials in the cockpit of a plane, while the next page shows astronaut Kathy studying a larger, more complex instrument panel. Though occasionally a bit static, the ink-and-watercolor illustrations do a good job showing Sullivan growing up. Readers wanting more information will find "A Note from Kathy" appended along with biographical information about Sullivan and paragraphs introducing other notable women in space. An attractive introduction to an American astronaut.
-Booklist

A picture book biography of Sullivan, the first woman to do an extravehicular activity--more commonly known as a space walk--during her 1984 mission on the Challenger. Whimsical illustrations alternate between Sullivan as a young girl looking over her father's blueprints, daydreaming about seeing the world, and learning to fly and Sullivan as an adult training at NASA and riding the launch into space. The text supplies a subtle dose of girl power as readers witness Kathy succeeding despite sexist statements from friends and adults, such as "Girls don't like those jobs" and "Girls are supposed to teachers or nurses or moms." Back matter includes a note from Sullivan about how she dreaded being asked, "What do you want to be when you grow up?," as well as a short essay with more information on her and other female space pioneers. However, only American women are featured here; others, such as Valentina Tereshkova, the first woman in space, are not mentioned. The simple text makes this volume a good option for a group read-aloud during a unit on space or Women's History Month, but there may not be enough substance here for school reports. VERDICT A wonderful and inspiring addition to biography and space collections.
-School Library Journal
or
Not Currently Available for Direct Purchase
Copyright © 2020 American Booksellers Association