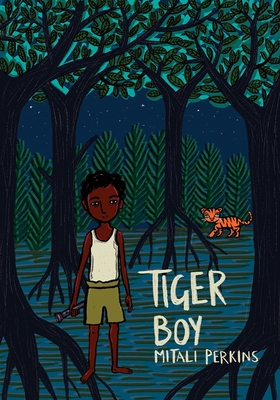 “One of the new tiger cubs has escaped from the reserve!”

When a tiger cub escapes from a nature reserve near Neel’s island village, the rangers and villagers hurry to find her before the cub’s anxious mother follows suit and endangers them all. Mr. Gupta, a rich newcomer to the island, is also searching—he wants to sell the cub’s body parts on the black market. Neel and his sister, Rupa, resolve to find the cub first and bring her back to the reserve where she belongs.

The hunt for the cub interrupts Neel’s preparations for an exam to win a prestigious scholarship at a boarding school far from home. Neel doesn’t mind—he dreads the exam and would rather stay on his beloved island in the Sunderbans of West Bengal with his family and friends.

When a Bengali boy finds and saves a tiger cub from a man who wants to sell her on the black market, he realizes that the schoolwork he resents could lead to a career of protection for his beloved Sunderbans island home.
When the not-yet-weaned cub escapes from a nearby reserve, Neel and many of his neighbors join the search. But some are in the pay of greedy Gupta, a shady entrepreneur who's recently settled in their community. Even Neel's father is tempted by Gupta's money, although he knows that Gupta doesn't plan to take the cub back to the refuge. Neel and his sister use the boy's extensive knowledge of the island's swampy interior to find the cub's hiding place and lure it out so it can be returned to its mother. The Kolkota-born author visited the remote Sunderbans in the course of her research. She lovingly depicts this beautiful tropical forest in the context of Neel's efforts to find the cub and his reluctance to leave his familiar world. While the conflicts resolve a bit too easily, the sense of place is strong and the tiger cub's rescue very satisfying. Pastel illustrations will help readers envision the story.
A multicultural title with obvious appeal for animal-loving middle graders.
-Kirkus Reviews


Set amid the tidal mangrove forests of the Sunderbans of India and Bangladesh, Perkins's story follows the efforts of a boy named Neel to track down a tiger cub that has escaped from a local reserve (the Sunderbans are a Unesco World Heritage site, Perkins notes in a glossary). To pay Neel's mother's medical bills, his Baba (father) works all hours for a man named Gupta, a newcomer to the area who has been buying up property and cutting down rare sundari trees. With Gupta offering a reward for the capture of the tiger cub (he plans to sell its skin on the black market), Neel and his sister, Rupa, make a plan to find the cub first. Perkins's (Bamboo People) evocative descriptions, boosted by Hogan's dramatic pastel drawings, convey an intense love and respect for the region's culture and environment. Readers should find it easy to become invested in the cub's return to the reserve and in Neel's fight to help create the best future for himself, his family, and his home.
-Publishers Weekly


*Set in the lush Sundarbans natural region of Bengal, this quiet, gripping tale emphasizes the deep but often fragile connection that exists between humans and nature. Passing exams will earn young Neel a much-coveted scholarship for a private boarding school in Kolkata, and the boy's family has their dreams pinned on him, feeling that a good education will ensure him a better quality of life. But Neel is too attached to the "golpata branches swaying in the monsoon rains…the evening smell of jasmine flowers…mingling with green chilies and fresh ilish fish simmering in mustard-seed oil" to ever consider leaving his home. He studies only halfheartedly for his tests, incurring the wrath of his serious headmaster. When a female tiger cub escapes from a neighboring animal reserve, Neel is determined to find her before she's snagged by greedy poachers led by Mr. Gupta, a corrupt local businessman. Gupta employs several of the villagers, including Neel's father, tempting them with additional income if they assist in the illegal effort. Informed by real-life situations in the region, Perkins avoids black-and-white characterizations and compassionately illustrates how dire circumstances affect a person's choices. Young readers will revel in the vivid action and suspense surrounding Neel and his sister Rupa's quest to locate the tiger cub. Adults will likely praise the novel's simple and clear narrative, which belies its complexity around issues related to climate change, poor economic conditions, class structure, and gender discrimination. VERDICT Sure to encourage vital conversations among children, this is a fine addition to libraries and classrooms seeking to diversify collections.
-School Library Journal, starred review


All Neel wants to do is live at home on India's Sunderbans Islands, where he can fish, carve, and hunt honey like his beloved father. However, because Neel is identified as a boy with promise and one who might earn a scholarship to a boarding school in Kolkata, his days in the islands might be numbered. Life is hard in the Sunderbans: a cyclone has hurt the local mangrove trees and rice crop, his mother has been sick and has incurred hefty medical bills, and now a valuable tiger cub has escaped. Add an unscrupulous developer with deep pockets and tiger-poaching on his mind, and Perkins has the perfect premise for an environmental adventure. Neel's father wants to help his son pass the scholarship exam, so he abandons his principles and joins the hunt for the tiger cub in order to pay for a tutor. Neel and his sister Rupa understand the importance of the tiger cub to the reserve and to the future of the island but also respect their parents' decisions. Fast-paced action, lots of references to the local flora and fauna, and clearly laid-out moral dilemmas come together in a satisfying way. The glossary and end notes add much to the story and answer any questions that a reader unfamiliar with the archipelago might have. The only unanswered question is, What happens to Rupa? Will she get to fulfill her dream of education? Sure hope so!
-The Horn Book

Mitali Bose Perkins was born in Kolkata (Calcutta), India. Her name means "friendly" in Bangla, and she had to try and live up to it because the Bose family moved so often - they lived in India, Ghana, Cameroon, London, New York City, and Mexico City before settling in the San Francisco Bay Area when she was in middle school.

Mitali studied political science at Stanford University and public policy at U.C. Berkekey, surviving academia thanks to a steady diet of kids' books from the public libraries and bookstores, and went on to teach middle school, high school, and college students. She has lived in India, Bangladesh, Thailand, and the United States. Mitali lives in Northern California with her family.