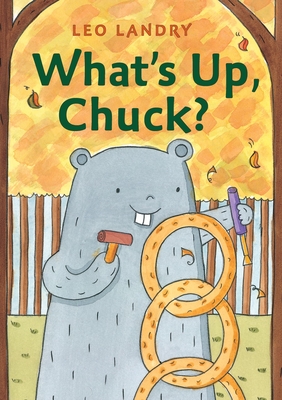 A hilarious follow-up to Grin and Bear It, this early reader offers lessons on jealousy, self-confidence and the art of making new friends.

Chuck Wood is upset. Jealous, too. Also insecure. As the winner of the Best of the Forest art contest three years in a row, he finds it very difficult to deal with the prospect that newcomer Scooter Possum’s abstract paintings might beat his wood sculptures. But with the help of his forest friends, Chuck deals with his hurt feelings and realizes that his love for creating art is greater than his need to win. When you follow your heart, everyone’s a winner.

Praise For What's Up, Chuck?…

Based on the title, readers might expect a book of gross humor. Instead they'll find a sweet story of friendship and competition in which everyone can be "best of the forest." Woodchuck Chuck is an artist working in wood and the winner of the Best of the Forest art contest three years running. Then Scooter the possum shows up. When his painting Splatter Matters wins first prize, Chuck is angry and jealous, and he begins to doubt his own abilities. Each of the eight short chapters begins with a full-page illustration that, with the chapter heading, hints at what is to come. Pictures throughout break up the text so new readers will not be intimidated. Chuck's friends provide kid-level comic relief with knock-knock jokes. (Though adults may chuckle at Scooter's similarities to Jackson Pollack and the allusion to current grass-roots movements, these references will mean nothing to beginning readers.) With wisdom beyond their years, Chuck's forest friends counsel him to gracefully accept his second-place recognition, and he rather quickly realizes that "awards are just whipped cream on a sweet-potato pie." The final chapter, "Lesson Learned," guarantees that no kid can miss the message. It's a kindhearted beginning chapter book, but second-graders may wish it had some vomit jokes.
- Kirkus Reviews

Chuck Wood is an extraordinarily talented woodchuck. His detailed wood carvings have won the Best in the Forest art competition for three years running. Then Scooter Possum, a gifted abstract painter, arrives in Woodland Forest. At first, Chuck is happy to have a new friend and artistic companion, but his confidence is shaken when praise is heaped upon Scooter and his art. Ultimately, Chuck realizes that friendship and the artistic process are more important than any first prize trophy. Engaging from the get-go, Chuck and Scooter are a duo in the tradition of best friends Frog and Toad. Readers will relate to the overwhelming jealousy, anger, and self-doubt Chuck feels when Scooter is awarded first place in the art competition, as well as his great relief after making amends. The text, printed in an easy-to-read black font against white and pale backgrounds, features wonderful word repetition and witty wordplay, including several knock-knock jokes. Chapter headings cleverly foreshadow forthcoming action, providing a helpful framework for emerging readers. The uncluttered pencil and watercolor illustrations focus on interactions between the Woodland Forest characters; the facial expressions convey emotions and relationships clearly and humorously. Using distinct black lines and soft, cheerful colors, the cartoonish illustrations break up the text into approachable sections within the eight very short chapters. A delightful story for those transitioning from beginning readers to chapter books.
- School Library Journal

Woodchuck Chuck creates stunning objets d'art out of wood, sculptures he proudly enters every year in the Best of the Forest art contest. When Scooter Possum, a painter, arrives in Woodland Forest, the gregarious Chuck invites him to stay in his burrow. The two happily work on their own projects in preparation for the contest, but green-eyed jealousy and self-doubt creep in when, first, Scooter makes a better dessert than Chuck (snickerdoodles) and then nabs the top prize in the art contest. Unhappy with coming in second, Chuck runs home and angrily smashes one of his sculptures. It takes his friend Fawn to remind Chuck of what matters: the joy he takes in making art. Eight short episodic chapters, each creating a separate, but connected, scene, help newly independent readers with stopping and starting points in the text. Numerous earth-toned watercolor and pencil illustrations preview each chapter; mirror important points in the action; and accentuate the characters' emotions through subtle changes in facial expressions. Besides offering a gentle examination of intrinsic versus extrinsic rewards, Landry uses natural language and includes a couple of those perennial knee-slappers: knock-knock jokes. This beginning reader is, without a doubt, as appealing as Scooter's snickerdoodles.
- The Horn Book Magazine

Leo Landry is a bookseller and is the author and illustrator of several books for children, including Trick or Treat, Eat Your Peas, Ivy Louise!, Space Boy (Houghton Mifflin Harcourt) and Grin and Bear It. He lives in North Easton, Massachusetts.
Loading...
or
Not Currently Available for Direct Purchase