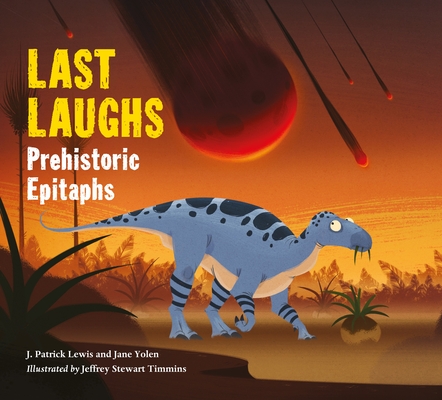 Poems framed as epitaphs for extinct prehistoric animals hit the proverbial (coffin) nail on the head in this darkly humorous collection from expert poets Jane Yolen and J. Patrick Lewis.

Macabre, ironic, and witty epitaphs share how prehistoric creatures like the terror bird, the woolly mammoth, and the T-rex met their demise.  The ever-entertaining J. Patrick Lewis and the inimitable Jane Yolen offer a collection organized by era, with posthumous poems paired with short secondary text providing additional, factual information about each creature.

"Trilobites the Dust," and so do the rest of a cast of extinct creatures in this sequel (prequel?) to Last Laughs: Animal Epitaphs (2012). In chronological order from the Paleozoic to the Cenozoic eras, dinosaurs, prehistoric, reptiles, and early mammals offer memento mori in pithy verse. “Iguanodon, Alas Long Gone,” for example runs: “Iguano dawned, / Iguano dined, / Iguano done, / Iguano gone.” With similar brevity, “Plesiosaur Sticks His Neck Out” of Loch Ness and has it chopped through by a Pict (a foot-note admits the anachronism), and unknown agents leave “Pterrible Pterosaur Pterminated.” In later times, a saber-toohed cat (“Tiger, tiger, hunting bright / near the tar pits, late at night”), a dire wolf, and a woolly mammoth are all depicted trapped in the gooey much. Each poem comes with an explanatory note, and a prose afterword titles “A Little About Layers” discusses how the fossil record works. Timmins reflects this secondary informational agenda in his illustrations without taking it too seriously – providing a spade-bearded, popeyed paleontologist who resembles a spud in shape and color to usher readers through galleries of fossil remnants or fleshed-out specimens meeting their ends with shocked expressions.

The poetry and prose form more of an uneasy détente than an integrated whole, but the comical pictures and the wordplay in these dino demises provide sufficient lift.
—Kirkus Reviews

In this follow-up to Last Laughs: Animal Epitaphs, Lewis and Yolen accomplish a rare feat — creating a sequel superior to the first. Timmins illustrates the demise of prehistoric creatures using an appropriately somber palette. The collection of poetry is certainly an introduction to dark humor, but given the well-known fact of all prehistoric animals’ extinction, it is decidedly less macabre than the earlier title. After all, as the first poem appropriately reminds readers, “Do we miss them? Now and then./But we survivors say, ‘Amen.’” Though the cover illustration depicts extinction by asteroid, many of the featured beasts meet more commonplace demises by predators. Several lesser-known animals are included, from the trilobite to the dire wolf and to the “vegan” dinosaur, Minmi. Lewis and Yolen seamlessly integrate nonfiction paleontological information, subdividing the book according to prehistoric eras and periods. They also follow each poem with a concise factual note, clearly delineating fact from creative license. Older children will enjoy punny inclusions such as “puncturation mark,” and adult readers may reminisce over a nod to William Blake: “Tiger, tiger, hunting bright/near the tar pits, late at night.” The text ends with an invitation for readers to create their own dino epitaphs, a perfect classroom or poetry celebration connection. VERDICT A witty poetry read-aloud that just may spark independent research in dinosaur enthusiasts.
—School Library Journal

Elegiac tombstone inscriptions have long been targets for good-natured skewering (think Disney’s Haunted Mansion) and even sharper-edged satire, and the idea of R.I.P.s directed at deceased dinos is promising. Execution doesn’t match concept here, though, as Lewis and Yolen present a variety of verse that’s more often miss than hit. The poems, neatly arranged chronologically from the Paleozoic through Cenozoic Eras (with specific periods noted as well), are seldom the concise tributes with startling punchlines that readers will probably expect, and few would fit on a tombstone. Instead the content is a grab bag of general comments on the featured creatures accompanied by a few italicized lines of scientific commentary or, in the disappointing instance of Plesiosaur, a tacit apology for how the information is incorrect. Nor does the boneyard theme enjoy visual treatment; a wackily cartoon-styled paleontologist Prof. M. Piltdown (sorry, kids, no explanation of the joke is given) appears in most scenes, re-imagining how his subjects may have met their demise. A closing note about geological layers in which dino bones are found lends curricular utility, and Yolen’s pithy “Holy Moly, Woolly Mammoth” is clever enough to make readers understand how this project might have worked. As the authors themselves suggest, “Maybe you could write your own epitaphs to round out our collection.”
—Bulletin of the Center for Children's Books

J. Patrick Lewis is the author of more than seventy books for children and served as US Children's Poet Laureate from 2011 through 2013. His books include Last Laughs: Animal Epitaphs, Take Two! (Candlewick), and Poem Mobiles: Crazy Car Poems (Schwartz & Wade Books). He currently lives in Westerville, OH.

Jeffrey Stewart Timmins is a children's book illustrator whose books include A Whole Nother Story, Another Whole Nother Story (Bloomsbury), and Play It Loud! The Rebellious History of Music (Capstone). He currently lives in Toronto, ON, Canada.
Loading...
or
Not Currently Available for Direct Purchase