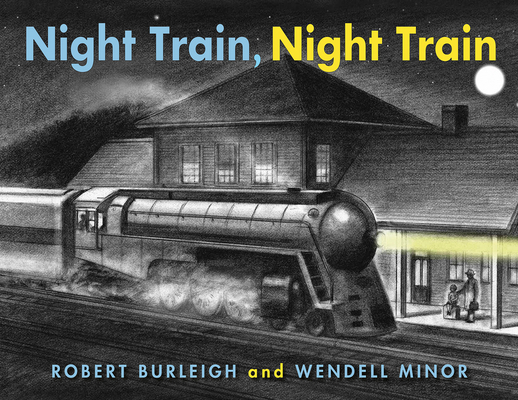 Ride the rails of the night train in this beautifully rendered journey conducted by renowned artist Wendell Minor and frequent collaborator Robert Burleigh.

Rhyming, lyrical text describes the sights and sounds of a nighttime journey from country to city on a passenger train in the 1940s. Largely painted in black and white, breathtaking illustrations feature pops of color as the train continues its trip until the full-color spectrum appears as dawn breaks and passengers arrive at the station. A nostalgic and innovative choice for readers fascinated by trains.

A passenger train travels to the city overnight in this rhyming picture book. On a wordless opening page, a young rider, seated near their teddy, looks out the window as the train travels in the dark. The train (pulled by a Dreyfuss Hudson steam locomotive) takes off, and then rhythmic words chug along: "Train ride! / Bump-bump. / Chug-chug. Slow. / Faster. Faster. / Off we go." The following double-page spread introduces the refrain: "Night train, night train, hold-on-tight train." Burleigh replicates the initial meter on the next page as the rider takes in their surroundings. As with the other verses, the refrain changes slightly along with the scenery. The visual structure—two full-page panels bordered by white followed by a double-page spread—repeats in sync with the rhythm of the text. Together, the words and pictures help this train run smoothly. One by one, isolated colors (black, red, blue, etc.) pop into the night world, highlighted in the color of the type that spells out the color's name and in some feature in the illustration. Some of the instances of color are quite subtle (for instance, the text's "big blue window" is actually quite small, as it's viewed from a distance), but, at the same time, such details add to the value of the nightscape. Minor's black-and-white graphite illustrations intimately capture the shadows and shapes of the train's night ride, ending in a beautiful full-color double-page spread as night turns to day and the ride is completed, the child and their mother, both white, alighting on the platform. A nostalgic, Depression-era nocturne for train lovers.
—Kirkus Reviews


A young boy clutching his teddy bear hops aboard the “Night-train, night-train, hold-on-tight train” to ride a train snaking into the darkness of the countryside. He watches the colors as they pass by: red for the stoplights and switches, blue for a window, white for a star, yellow for the moon, and orange for sparks. Rhyming text announces the “into-morning-bright train” as the last two wordless double-page spreads show the colorful city and a happy welcome from Mom. The realistic illustrations highlight the awardwinning Minor’s ability as he depicts the black night morphing into gray and then dawn and bright sunlight. A footnote explains his desire to depict accurately the Dreyfuss Hudson locomotive, the last of a generation of steam engines of the 1930s and ’40s. The soft pencil drawings complement the poetic writing as the passing sights blur with the rapid train: “Can’t stop. Can’t stay. Night train, night train, wish-I-might train.” It’s a perfect story for all train-lovers and a nostalgic nod to those who love the magic of the rails.
—Booklist


A young boy happily travels alone through the night on a steam locomotive in the early to mid 1900s. He is excited by all that he sees, hears, and feels—the black sky filled with white stars, the clanging and dinging of wheels and bells, and the speed of the fast-moving train. There is much to stimulate the senses, and the trip is full of wonder and delight. This rhyming picture book for young children is soothing and cadenced. The lyrical stanzas are short and succinct and printed in a large bold font that accentuates color words. The illustrations, done in graphite with colorful accents added digitally, perfectly set the mood for the midnight journey. The warm colors of the sunrise will envelop readers. Young children who are fascinated with trains will absolutely love this book and ask to read it again and again. The illustrator’s brief note about the Dreyfuss Hudson locomotive at the end is a perfect finishing touch. VERDICT A dreamy, lyrical picture book for young train enthusiasts.
—School Library Journal

In chalky grayscale art with occasional splashes of color, a steam train from the 1930s and ‘40s (identified by Minor as a Dreyfuss Hudson locomotive) rolls along through the night while a boy with a teddy bear watches from the train windows. Burleigh describes the sights, writing in a gentle rhythm that mimics the locomotive’s soothing chug: “A barn. A house/ against the sky./ Big blue window/ like an eye.” Illustrations show a bird’s-eye perspective of the train (two Canada geese fly far above) as well as views of the train emerging from a tunnel, passing stations, and riding over bridges. Finally, the boy and the bear peer out the window onto a hazy, dawn-lit cityscape. Wendell’s evocative scenes capture the nostalgia of train travel and the thrill of a nighttime journey.
—Publishers Weekly

Robert Burleigh is the award-winning author of more than forty books for children, including Look Up! Henrietta Leavitt, Pioneering Woman Astronomer and Hit the Road, Jack. Robert has collaborated with Wendell Minor on Night Flight: Amelia Earhart Crosses the Atlantic , Abraham Lincoln Comes Home, If You Spent a Day with Thoreau at Walden Pond, and Into the Woods: John James Audubon Lives His Dream.

Wendell Minor has designed more than two thousand book covers and written and/or illustrated more than fifty children's books, including many in collaboration with Jean Craighead George. Recent titles include Trapped!, How Big Could Your Pumpkin Grow?, and If You Were a Panda Bear. Wendell has collaborated with Rob Burleigh on Night Flight: Amelia Earhart Crosses the Atlantic , Abraham Lincoln Comes Home, If You Spent a Day with Thoreau at Walden Pond, and Into the Woods: John James Audubon Lives His Dream.
Loading...
or
Not Currently Available for Direct Purchase