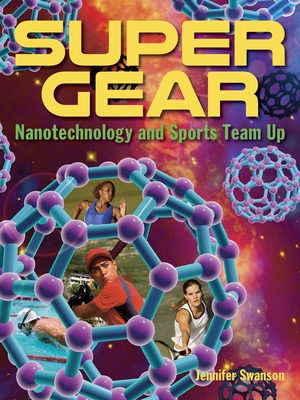 Nanotechnology and Sports Team Up

A close-up look at sports and nanotechnology, the cutting-edge science that manipulates objects at the atomic level.

How are the sports played by Michael Phelps, Serena Williams, Michelle Wie, and Usain Bolt related? Nanotechnology! A rapidly growing scientific field, nanotechnology is used to create high-tech swimsuits, tennis rackets, golf clubs, running shoes, and more. It is changing the face of sports as we know it. Cutting-edge science; high-performance sports

Praise For Super Gear: Nanotechnology and Sports Team Up…

Science teacher and writer Swanson tells the story behind nanotechnology's introduction and impact on sports. Swanson defines her subject as "the science of things at the nanoscale....Nano- means ‘one-billionth,' so a nanometer is one-billionth of a meter" before going on to explore how nanotechnologists are proceeding from superfibers to discover still more inventive ways to apply the technology to fabrics and equipment. She hasn't found a really comfortable fit between her audience and her writing in this effort. She asks readers to field concepts such as molecular structure and the refractive qualities of nanoparticles on the dispersion of light, and she also belts out "Now that's tiny!" or "We're talking about some pretty small stuff!" The two don't jibe. Nor do her introductions to the chapters on various nanotech uses square with the material coming later in the chapter. "From swimming to biking to running, the fastest person to finish is the winner," she writes at the beginning of the chapter on "super suits" before going on to discuss "silicon nanofilaments" with "microscopic spikes." Swanson is splendid at explaining how nanotechnology works, and boxed asides help readers conduct experiments on drag, surface area, and such. But she can also go wrong. "There is no prize for being the best drafter." The best drafters are in the best position to win, which they then often do. Ask Apolo Ohno. Plenty of good science sunk by tone and blunders.
- Kirkus Reviews

This title provides a fascinating insight into the developing world of nanotechnology applications in sports. The opening chapter outlines concepts of molecular bonding, including an illustration of the crystalline structure of ice. The text then segues into a lucid explanation of the very different forces at work in extremely small carbon nanoparticles. Subsequent chapters examine changes wrought by nanotechnology in particular sports: football helmets that absorb more energy and could protect against concussion, shoes and track surfaces meant to improve running speed and reduce injury, golf clubs and tennis racquets that are stronger and lighter, and swimsuits designed in conjunction with NASA intended to reduce drag. The sports connections are tied to standout athletes, including swimmers Alia Atkinson and Michael Phelps, golfers Michelle Wie and Phil Mickelson, speed skater Shani Davis, and tennis champion Serena Williams. Sidebars and simple drawings illustrate important concepts in physical science, especially lift, turbulence, and drag. One "Super Fact" sidebar shows how a single-walled carbon nanotube is narrower than a human hair in the same proportion as the hair is to a typical house. A hitch is that the science is so new that some of the technology is unproven. A sidebar on Jamaican sprinter Usain Bolt concludes that the effect of his nanotech shoes on his speed is unknown. VERDICT A highly engaging introduction to an exciting aspect of cutting-edge, real-world science for STEM collections.
- School Library Journal

Jennifer Swanson is the award winning author of over 25 nonfiction and fiction books for children. Her books in the “How Things Work” series by The Child’s World were named to the 2012 Booklist’s Top 10 Books for Youth. Top reviews include a starred review in Booklist, and recommended reviews from School Librarians Workshop, Library Media Connection, and a Nerdy Book Club award. Jennifer's passion for science resonates in in all her books but especially, BRAIN GAMES (NGKids) which received a Eureka! Honor Award from the California Reading Association and SUPER GEAR: Nanotechnology and Sports Team Up  which was named both a Best STEM book of 2017 and an Outstanding Trade Book 2017 by the National Science Teacher Association. She lives in Jacksonville, Florida.
Loading...
or
Not Currently Available for Direct Purchase