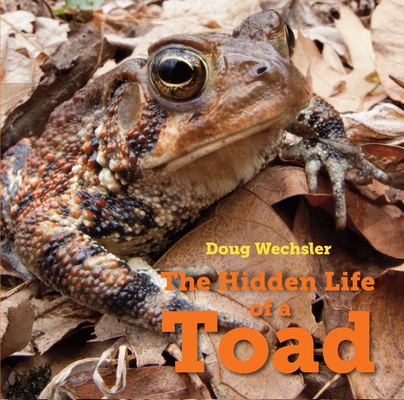 The Hidden Life of a Toad

In jaw-dropping photos, Doug Wechsler captures the life cycle of the American toad from egg to tadpole to adult. To get these images, Wechsler sat in a pond wearing waders, went out night after night in search of toads, and cut his own glass to make a home aquarium. The resulting photos reveal metamorphosis in extreme close-up as readers have never seen it before.

Budding naturalists will be transfixed by this unprecedented peek into the secrets of tadpole transformation.


A book that encourages observation and conservation and may start some young biologists off on their own lifelong quests to understand animals — Kirkus Reviews, starred review

Praise For The Hidden Life of a Toad…

"What is this tangle of stuff? It looks like a pile of spaghetti," says the text about the photograph of black-spotted, jelly-like squiggles creeping over the gutter from the recto spread that is surely enigmatic and even a bit creepy. A page turn reveals that the spots are embryos, thousands of them encased in each jelly strong, and a single little egg "would just fit inside this o." The book updates every few days the progress of the eggs as they hatch into tadpoles, bringing readers along with large close-up photos, enhanced by insects and labels, that make it easy to view each new anatomical bit discussed in the text. In his closing notes Wechsler addresses how he captured his photographs both in the wild and in an aquarium and also his surprise at unexpected observations. This personal sense of wonder and discovery translates well into his text, inviting the audience to puzzle out stages of tadpole-to-toad development. On Day 27, "Legs grow out. Toes are forming. Why would a tadpole need legs and toes?" Some twenty days later we find out, as the tadpole becomes a toadlet and "it moves to the shore." Eventually (year three), she's ready to mate and the life cycle narrative reaches its logical next chapter. Although some adult readers may be a bit squeamish at the frankly voyeuristic close-ups of the toads' copulation, kids will be simply be amused by the male rivals vying for their reproductive rights: "Whack! He kicks another male who tries to grab her." End matter is written in the same kid-friendly tone as the text, covering the difference between frogs and toads, trivia, conservation; an illustrated glossary and additional resources are also included. This will be an excellent addition to primary-grade science collections.
—BCCB

Biologist and photographer Wechsler’s chronicle of a toad’s journey from embryo all the way to adulthood is insightful. The images—detailed full-color photographs—are everything a budding naturalist could wish for, right down to the warty close-ups. The text, while clearly written and full of intriguing tidbits (for instance, a tadpole hangs out in water too shallow for hungry fish, and the tadpole’s tail is recycled within its body) does lack a certain grace. Still, the content presented is pertinent to the life cycle of amphibians. The book includes a primer on the differences between a frog and a toad, a list of toad facts, and information on conservation efforts. Wechsler also explains how he managed to take the photos. VERDICT Suitable for libraries needing to bolster their early nonfiction collections.
—School Library Journal

How do toads develop from fertilized eggs? Do toads need saving? These questions and more are answered in this excellent photo essay that records three years in the life of a female toad. The story is told in easy language accompanied by detailed, intriguing photos that will keep any animal lover engaged. This book will also draw in children (or adults) who may be less immediately interested in the subject, due to its clarity and effective design. Each full-bleed two-page spread includes a large photo taking up three-quarters of the spread and a blue rectangle (placed on the left or the right to vary the layout) with text that describes an important day in the toad's development. Text is generally minimal, but it provides enough information for readers to follow the milestones in the toad's life and to fully appreciate the picture sequence. This book can serve as a model for its type, with its clean layout, appropriate font, sharp photos, and accessible language. Ample backmatter that includes information on toad preservation and how the photographer did his work extends the wonder.
A book that encourages observation and conservation and may start some young biologists off on their own lifelong quests to understand animals.
—Kirkus Reviews (STARRED REVIEW)

Kids may know the life stages of a toad, but how do those radical changes take place? And what does the animal look like during its transformation from one stage to the next? This clearly illustrated volume offer close-up, color photos of toads as they grow and change, beginning with embryos developing on jelly strands and concluding 1,098 days later with a female toad expelling two long jelly strings laden with eggs soon fertilized by a male. It’s one thing to know that a toadlet has arms, whereas a tadpole does not. It’s quite another to see the arm formed beneath the tadpole’s translucent skin, ready to pop out. On each double-page spread, the succinct, well-focused text appears alongside a large, horizontal photo. Occasionally a label within a picture identifies features mentioned in the text, such as a tadpole’s gills. Wechsler trained as a biologist before becoming a professional wildlife photographer and writer and it shows; the photos and text would interest students at many grade levels, but the short sentences and large type make the book accessible to younger readers. The back matter offers additional information on toads and the photographer’s process. A fascinating look at toad development.
—Booklist (STARRED REVIEW)

Biologist and photographer Wechsler (Marvels in the Muck) documents the life cycle of a toad, providing crisp images, accompanied by poetic descriptions: "Tiny tadpoles school at the edge of the pond. The water is warm here, and too shallow for big, hungry fish. Tadpoles grow fast in warm water." Wechsler numbers each day of the toads' development, helping readers stay connected to the changes taking place as tails and gills take shape ( in one especially striking moment on Day 41, readers see a toad's arm pushing against its translucent skin, ready to burst through). Jumping—toadlike, perhaps—from Day 70 to Day 1097, Wechsler shows how an adult toad mates and the cycle begins anew. Wechsler's images provide a remarkable visual chronicle of an easily overlooked creature, and closing notes leave readers with additional facts about these amphibians.
—Publishers Weekly

A fascinating up-close account of these bumpy-skinned toads and their ritual can be seen in The Hidden Life of a Toad by Doug Wechsler.  Author-photographer Wechsler went out night after night to find and photograph toads for this unusual insight into this amphibia. He even built his own aquarium and used special close-up lenses to pho0tograph developing embryos and tadpoles. His picture gallery covers the early days when embryos (tiny black balls) take shape. By day five the embryos turn into tadpoles. Pictures show them growing long skinny tails and later legs and toes and finally four arms. “With four limbs the miracle of metamorphosis is underway,” the author notes. It’s a big change from tadpole to toadlet who can then move ashore and live a land life. No, they won’t give you warts. But they do have poisons in their skins to deter being eaten by other animals. This is an important book about the endangered toad who is so much our friend, eating insects and other pests in our gardens.
--Vermont Country Sampler

Doug Wechsler takes his inspiration from the jungles, swamps and seashores of the world as well as from his own backyard. By showing the wonders of nature and its humorous side he hopes to motivate his readers to deepen their interest in their natural surroundings. Doug is a wildlife biologist, a nature photographer, and the author of more than twenty books for children, including Marvels in the Muck: Life in the Salt Marshes and Frog Heaven: Ecology of a Vernal Pool (Boyds Mills).
Loading...
or
Not Currently Available for Direct Purchase