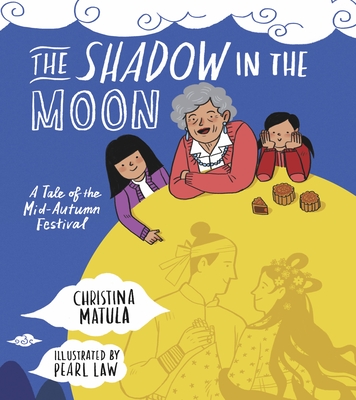 The Shadow in the Moon

A unique blend of traditional folklore and contemporary customs brings the Chinese Mid-Autumn Festival to life.

Two sisters and their grandmother celebrate a popular Chinese holiday with family. Their favorite part? Mooncakes, of course--along with Ah-ma's story of the ancient Chinese tale of Hou Yi, a brave young archer, and his wife, Chang'E. A long, long time ago, Hou Yi rescued the earth from the heat of ten suns. The Immortals rewarded him with a magic potion that could let him live in the sky with them forever. But when a thief tries to steal the potion, what will Chang'E do to keep it out of dangerous hands? The sisters are mesmerized by Ah-ma's retelling and the fact that the very mooncakes they enjoy each holiday are a symbol of this legend's bravest soul.

Praise For The Shadow in the Moon…

During the Mid-Autumn Festival, a girl hears her Ah-ma tell the story of the lady whose image adorns the mooncakes. Long ago, Hou Yi the archer saved his people from the scorching heat of 10 suns, and was gifted an immortality potion. But his wife, Chang’e, swallowed the potion to prevent a thief from taking it. Realizing that she had become the Spirit and Lady in the Moon, Hou Yi honored Chang’e by presenting her favorite foods, including round cakes. One double-page spread features family members around acircular table, which emphasizes the motif of the full moon. The cartoonlike illustrations are reminiscent of Tomie dePaola, with warm reds and yellows effectively used to depict the heat of the 10 suns, while cool greens and blues show the earth’s relief under only one sun. Useful for introducing a significant festival celebrated in Chinese and other East Asian cultures. An author’s note includes a recipe for mooncakes with red bean filling.
—Booklist

In this title, a grandmother (aka Ahma) tells the story behind the Mid-Autumn Festival. Long ago, 10 suns became bored and decided not to shine individually but came out all at once, causing big problems on Earth. Hou Yi, a young archer, comes to the rescue by shooting down nine of the suns. He is rewarded for his efforts with a mafic potion that will let him live forever in the sky. He and his wife, Chang'e, hide it to keep it safe. When a thief breaks in, Chang'e swallows it, and becomes the Spirit and Lady in the Moon. Seeing her silhouette on the moon, Hou Yi realizes that his wide is now immortal. He is sad, but on the anniversary of when she became Spirit of the Lady in the Moon, he remembers her by putting out her favorite foods like small cakes. In addition to the story, there is more information about the Mid-Autumn Festival and a recipe for mooncakes with redbean filling. The engaging story within a story is well written and may be relatable to many children. For example, the mooncakes are described as being "as small as my hand and as round as the moon." The cartoon illustrations are colorful and modern, yet complement the timeless tale. VERDICT: A good introduction to the Mid-Autumn Festival and Chinese culture, perfect for classroom use or one-on-one reading.
—School Library Journal

Christina Matula is half Taiwanese, but raised in Canada and loves learning about her heritage through legends and festivals. She hopes her stories will spark in an interest in Chinese culture for readers of all backgrounds. The Shadow in the Moon is her first picture book. Christina now lives in Hong Kong.

Pearl Law is a budding children's book illustrator. She works with pencil, ink, gouache, and Photoshop, and is the illustrator of Clap Your Hands.
Loading...
or support indie stores by buying on
(This book is on backorder)