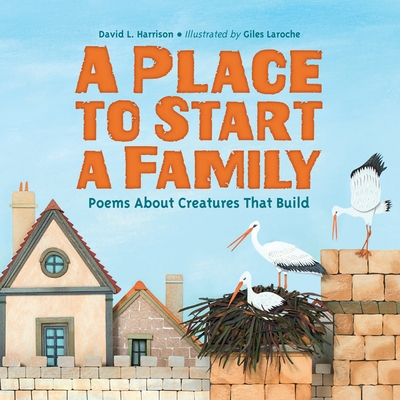 A Place to Start a Family

Poems About Creatures That Build

A poetry collection introducing animal architects that build remarkable structures in order to attract a mate and have babies.

Many animals build something--a nest, tunnel, or web--in order to pair up, lay eggs, give birth, and otherwise perpetuate their species. Organized based on where creatures live--underground, in the water, on land, or in the air--twelve poems bring fish, insects, reptiles, mammals, and birds to life. Back matter includes more information about each animal.

"A fine synthesis of poetry and science" — Kirkus Reviews

"An inviting introduction to a dozen industrious creatures" — Publishers Weekly


"A natural for classroom use, with eye-catching art that will lure little ones in" — Booklist

Praise For A Place to Start a Family: Poems About Creatures That Build…

Twelve poems present a variety of animal homes and mate-attracting constructions. Arachnids (trapdoor spider, garden spider), birds (red ovenbird, white stork), fish (stickleback, pufferfish), insects (termite, paper wasp), mammals (star-nosed mole, beaver, prairie dog), and a reptile (the king cobra) are each introduced by way of a double-page spread and a simple two-to-eight stanza poem. In four sections—building underground, on land, in the water, and in the air—animals are shown building webs, nests, food traps, and tunneled homes, along with their mates, eggs, or young. Laroche's layered, cut-paper illustrations are clear and intriguingly detailed, handsomely supporting the informational content of each poem. Rich colors and varied textures allow this 3-D original artwork to work well in two dimensions. Harrison's poems employ varied voices, rhythms, and formats; all are memorable and easy to understand. Some are humorous: a busy stickleback male appeals to a potential mother of his family: "The best nest / that's ever been! / Please, / Ms. Stickleback, / swim in." Backmatter gives each animal an explanatory paragraph and, for several, a suggestion of books for further exploration. The author's and illustrator's own sources are not indicated. A bonus poem and terrific illustration on the last page describe "A different kind of builder," sun coral, which creates coral reefs by congregating together. A fine synthesis of poetry and science.
— Kirkus Reviews

In 12 playful rhyming poems, Harrison explores the architectural feats of animals that build homes for themselves on land, in the water, and up in buildings and trees. A white-spotted pufferfish attempts to impress a potential mate (“Tiny sculptor/ thinks grand,/ builds a nest/ out of sand/ forty times/ his own size/ trying to/ attract a prize”), while a red ovenbird spends months creating a domelike dwelling (“How do you know/ to weave/ like that?/ With grass and hair/ and leaves/ like that?”). Laroche’s cut-paper illustrations, created with handpainted papers, lend a real sense of depth and dimension to the creatures’ layered homes of grass, leaves, and other organic material; closing notes discuss each animal in greater detail, and a bonus poem looks at the growth of coral reefs. An inviting introduction to a dozen industrious creatures.
— Publishers Weekly

Lively rhymes and arresting cut-paper collage illustrations are an appealing combination in this introduction to a variety of animals that build homes. The animals are grouped by where they build homes; for example, paper wasps and storks build homes “in air,” while sticklebacks and puffer fish build homes underwater. The poems vary nicely in structure, and while some are more successful than others, they are, overall, approachable and gently informative. Complementing the text, Laroche’s superb collage illustrations offer additional views of the homes described in the poems and are rich with detail, from the meticulous scales on the king cobra to the multicolored, individually cut branches and logs making up the beaver’s den. A cutaway section of a termite’s nest, revealing the cast network of tunnels within, is particularly engrossing. For readers looking for eve more information, the back matter provides additional commentary about each creature and the way it builds its home. A natural for classroom use, with eye-catching art that will lure little ones in.
—Booklist

David L. Harrison has published more than eighty books, has been a keynote speaker or presenter at 265 state, regional, and national conferences in 30 states and has an elementary school named after him. David's first book for children, The Boy with a Drum (Golden Press), was released in 1969 and has sold two million copies.

Giles Laroche has illustrated many children's books and both wrote and illustrated If You Lived Here: Houses of the World (Houghton Mifflin). Every illustration he makes involves drawing, cutting, painting, and gluing--and often has seven or eight layers. www.gileslaroche.com
Loading...
or
Not Currently Available for Direct Purchase