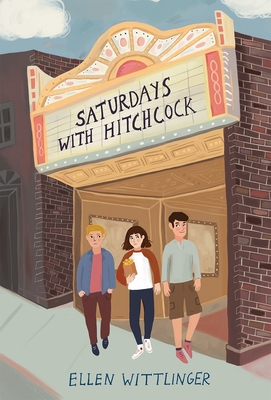 Twelve-year-old movie-loving Maisie is in need of a distraction from her current romantic dilemma when her Uncle Walt comes to stay with her family after being hurt on the set of the movie he's filming in Hollywood.

Maisie's best friend, Cyrus, has been hanging out a lot with Gary Hackett, whose last-name sounds to Maisie like a cat barfing up a hairball. When it seems as if Hackett might like Maisie romantically, she's none too pleased, and Cyrus is even less impressed.

Uncle Walt has a way of pointing Maisie in the right direction, and Maisie's love of movies also keeps her centered. Heading to the local independent theater on Saturdays to see old movies helps Maisie stay grounded as she struggles with growing up, family tensions, a grandma who seems to be losing her memory, and a love triangle she never expected.

Praise For Saturdays with Hitchcock…

Twelve-year-old film buff Maisie's weekly routine of seeing movies with her friend Cyrus is disrupted when Gary joins in. Maisie may not feel ready for dating or anything like it, but Gary has an evident crush on her, Cyrus has a secret crush on Gary, and suddenly everything's complicated. Meanwhile, her grandmother is showing signs of dementia, and her sympathetic but flighty uncle is staying with the family while he recovers from an injury—all of which fuels conflicts about family duty. Distinctive characterization is a significant strength here, and Maisie's response to Cyrus's coming-out is all her own—she's upset at first not for conventional reasons but because of her fear of change and maybe, just maybe, because of her own feelings for Gary. A late-in-life romance for Grandma makes the family story line lighter than it otherwise might be, but the novel acknowledges that, like the many films it references, its story ends at "a good stopping point," which doesn't mean everything's perfect. Tweens who are wondering what their relationships, and their romantic relationships, will look like as they grow up should find plenty to think about in this honest novel.
—The Horn Book


Twelve-year-old Maisie loves seeing old movies at the local theater with her best friend Cy, and she worships her Uncle Walt, who is in Hollywood trying to make it as an actor. When Walt injures himself on set and comes to stay with Maisie’s family, she’s overjoyed to have him visit. Less excited is Maisie’s mother, who feels that Walt has abandoned his family responsibilities, especially after Maisie’s grandmother starts displaying signs of memory loss. Worried about her grandmother, Maisie is also grappling with the fact that Gary, a classmate with a crush on her, has started horning in on her time with Cy. When Cy reveals that he “like likes” Gary, Maisie tries to figure out how it will affect their relationship and her own changing feelings for Gary. Wittlinger (Local Girl Swept Away) packs this sensitive coming-of-age story with movie references and trivia, but even readers less cinema obsessed than Maisie will sympathize with her conflicting desires to grow up and stay young forever. Her loyalty to Cy is especially moving, as is Wittlinger’s portrait of dementia’s impact.
—Publisher's Weekly


Maisie, 12, is in the midst of several quandaries. She and her best friend, Cy, have become a trio, and Maisie is afraid that new addition Gary Hackett likes her. Then it becomes clear that Cy likes Gary. Ménage à trouble! In addition, Maisie’s actor uncle has moved back to their small house to recover from an accident, her grandmother is showing signs of dementia, and her mother loses her job. Tensions boil, but Maisie finds relief at the old movie theater in town, where she and Cy are regulars. The theater is owned by grumpy Mr. Schmitz, who has had his own decades-long crush—on Maisie’s grandmother. If this sounds like a full plate, it is, but each morsel is quite tasty, and veteran writer Wittlinger balances plots with aplomb. Some scenarios are more rosy than realistic, as in the cases of Cy’s coming out to an unruffled Gary. Yet it is the novel’s hopeful aspects that make this such an enjoyable read. Happily, all the (many) movies referenced throughout are listed at the book’s conclusion.
—Booklist


For twelve-year-old Maisie, watching old movies at the Lincoln Theater every Saturday with her best friend Cyrus provides a much-needed escape from the uncertainties she faces in real life. Her grandmother’s increasing forgetfulness and her family’s tight financial situation mean everyone but Maisie is less than thrilled when Uncle Walk — who is an actor in Hollywood — comes to stay after a recent on-set injury. Since Uncle Walt is one of the few adults who always understands her, Maisie is delighted, and when she finds herself in the center of a middle-school love triangle between herself, Cyrus, and their new friend, Gary, she needs Uncle Walt’s guidance more than ever. The book provides entertaining yet affecting portrayals of the different types of young love people experience and witness — from love between family members and friends to budding romantic love to even love found late in life, which Maisie witnesses through her grandmother’s unexpected reconnection with an old flame. The Use of first-person narration adds authenticity to Maisie’s perspective as readers gain insight into her inner thinking and responses to pivotal life situations (e.g. when Cyrus tells Maisie that he is gay and that he likes Gary). Wittlinger presents a moving coming-of-age story that will feel relevant to tween readers, particularly those wrestling with the notion of what it means to grow up and what it means to experience and witness love in its many forms.
—The Bulletin of the Center for Children's Books

Ellen Wittlinger is the author of fifteen YA and middle-grade novels. Her novel Hard Love won both a Printz Honor Award and a Lambda Literary Award. Her books have been on numerous ALA Best Books lists, Bank Street College of Education lists, and state award lists. Wittlinger has taught at Emerson College in Boston and in the Simmons College Writing for Children MFA program. She currently lives in Haydenville, MA.
Loading...
or
Not Currently Available for Direct Purchase