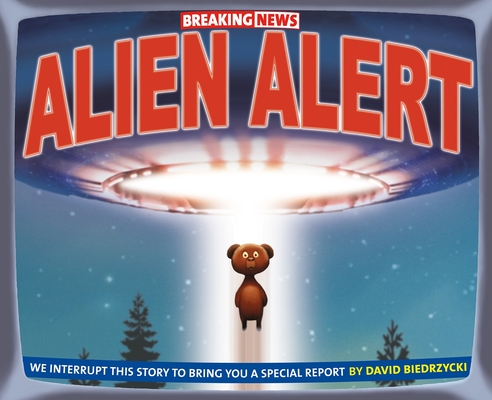 Bears in space! The bears from Breaking News: Bear Alert and Bears to the Rescue are back, and this time they're extraterrestrial.

When a UFO beams up Baby Bear and abducts the family, the human world goes crazy. Hilarity and chaos ensue as scouts, scientists, street vendors, and the mayor try to put their own spin on the story. Intrepid but bumbling reporter Chad Newsworthy covers it all, searching for the truth: Why did aliens snatch up these animals? (Hint: It's someone special's birthday!)

The moment his brother showed him how to draw a face when he was 4 years old, David Biedrzycki has been hooked on drawing. In his early years he created stories for his parents and friends. A commercial artist since 1980, his work has appeared in magazines, newspapers, book covers, billboards and even ice cream boxes. The supermarket is like a gallery of his work.

Now he has now returned to his first love of picture book storytelling. He has illustrated close to 30 books including self-authored and award winning Ace Lacewing, Bug Detective series, Me and My Dragon series and his newest series Breaking News Bear Alert, a Junior Library Guild Selection and winner of book the Illinois Monarch Picture Book Award and the Georgia State Picture Book Award. David travels the world extensively to over 100 schools a year sharing his digital book making process with aspiring young writers, illustrators and readers.

In space, no one can hear you party. Punctuating his story with special news reports complete with crawl feeds, Biedrzycki returns to the form that served him so well in Bear Alert (2014) and Bears to the Rescue (2016). Here, our three bear heroes find themselves unexpectedly sucked into a UFO along with a strange assortment of wildlife as well as farm and zoo animals. The action then cuts between the experiences of the startled creatures and the frenzied Channel 3 News reports for the people back on Earth. When at last the aliens land and discharge their guests, it becomes clear that these space denizens are more akin to Close Encounters of the Third Kind folks than Independence Day meanies: All the disembarking creatures sport goody bags from a birthday party that was truly out of this world (as memorialized on the rear endpapers). Rather surprisingly, the TV-news format feels fresh as ever, and Biedrzycki knows how to use its storytelling tropes to the book's best advantage. His Adobe Photoshop illustrations keep the action hopping and include such contemporary touches as smartphones and chyrons even as old-fashioned test patterns and a predigital TV (with cable box atop) make an occasional appearance. Considering the real-world 24-hour news cycle, these ursine antics amid the stars make for oddly comforting reading.
—Kirkus Reviews


Chad Newsworthy and the News 3 crew from Bear Alert (2014) and Bears to the Rescue (2016) are backwith a new scoop. This time, according to eyewitnesses, woodland, farm, and zoo animals have beencarried off by a spaceship. Most of the story focuses on the television coverage, including brief interviewswith experts and involved individuals. A couple of quick glimpses of the bewildered captives are insertedbetween clips. After a day of much brouhaha, the spaceship reappears and the animals descend the loweredwalkway carrying party accoutrements. Chad declares, “We are not the only party animals in theuniverse!” and all is well. Faux photos featured on the end pages show that the shindig was a seven-yearoldalien’s birthday party. The crisp computer-generated illustrations range from brightly coloredtelevision images to dark, atmospheric night and space scenes. Although the humans dominate the story,the adorable animals are the true stars—one wishes there were more party scenes and less news coverage.No matter, it’s on to the next news cycle.
—Booklist
or
Buy Here
Copyright © 2020 American Booksellers Association