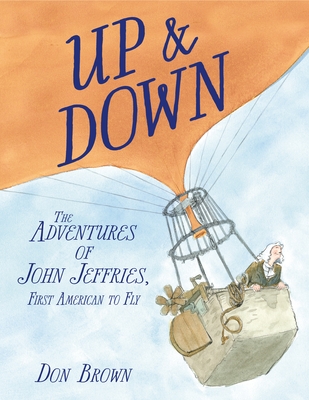 The Adventures of John Jeffries, First American to Fly

Swept up by the European ballooning craze of the 1780s, Dr. John Jeffries longed to become the first person to fly across the English Channel. But first he had to outwit a rascally copilot, keep the balloon from bursting, and avoid crashing into the sea. The good doctor's quick-thinking solutions will surprise young readers--and keep them giggling. Orbis Pictus and Sibert Honor winner Don Brown tells this quirky true story with his usual accuracy and heart.

Praise For Up & Down: The Adventures of John Jeffries, First American to Fly…

This witty picture-book biography describes the adventures of eighteenth-century John Jeffries, an earlydabbler in meteorology and a respected physician who, due to his Loyalist tendencies, found himselfexiled to England after the Revolutionary War. Intrigued by the early hot-air balloon flights of theMontgolfier brothers of France, Jeffries offered to bankroll a British attempt at crossing the EnglishChannel, contingent upon his inclusion as a passenger. The majority of the action concentrates on thisharrowing but eventually successful endeavor, graphic details included (at one point, the two balloonistsrelieved themselves over the side of the gondola to lighten the load). Believed to be the first scientist toconduct aerial research (measuring temperature, humidity, and air pressure), Jeffries’ subsequent fameallowed for his return to America—but no more adventures aloft. The detailed pencil-and-watercolorillustrations add humor, and an epilogue, bibliography, quotation sources, and an author’s note roundthings off. This engaging and somewhat wry account will aptly supplement STEM research assignments.
—Booklist

A daredevil and a naturalist go up in a balloon . . . it sounds like the start of a joke, but in 1785, pioneering balloonist Jean-Pierre Blanchard and self-exiled American Loyalist John Jeffries attempted and succeeded in the first flight across the English Channel, catching a favorable wind from England to France. The enterprise appeared doomed from the start, when wily Blanchard tried to trick Jeffries out of the flight and grab the glory for himself, but the pair managed to pull together, shedding ballast, equipment, clothing, and, in a scene certain to please readers, their own liquid waste in an effort to keep their hydrogen balloon aloft. This episode has gotten rollicking picture book treatment in Olshan’s A Voyage in the Clouds (BCCB 12/16), and here veteran biographer Brown retains much of the innate humor. He also emphasizes Jeffries’ scientific pursuit of firsthand observations of the atmosphere, contrasting the goals of Blanchard and Jeffries throughout the text and into concluding notes. Brown’s signature pencil and watercolor artwork highlights this strange bedfellow relationship, and the variety of perspectives on the flight from the sky and on ground invite kids to share the amazement (and the giggles at the minimally clad balloonists). A bibliography and quotation sources are also included.
—The Bulletin of the Center for Children's Books


Mentions of ballooning and weather science are somewhat eclipsed by the narrative of John Jeffries’s two balloon voyages in this nonfiction picture book. Jeffries, a Bostonian doctor, moved to London after siding with the British during the American Revolution. In the 1780s, experiments with hot air and gas balloons started a balloon craze, and Jeffries, who kept a daily weather diary, saw it as a way to record weather data at different altitudes. After that first science-focused trip, he and his somewhat opportunist partner Jean-Pierre Blanchard set out on a more dangerous journey to become the first balloonists to cross the English Channel. Brown humorously details the ensuing drama as the balloon rises and sinks, and some of the best spreads in the book are of Jeffries and Blanchard unloading all the extraneous equipment to lessen their weight. One last ditch effort leads to an image of two men relieving themselves off the back of the balloon, which is sure to get a giggle out of the intended audience. The prose describes Jeffries’s questions about why the balloon rose and sunk that are disappointingly never answered. VERDICT Light on science, but an entertaining supplemental purchase for elementary nonfiction collections
—School Library Journal

Don Brown is the author and illustrator of more than two dozen books for young readers, including Drowned City: Hurricane Katrina and New Orleans, an Orbis Pictus Award winner and a Sibert Honor book. He has been widely praised for his resonant storytelling and expressive watercolor paintings that evoke the excitement, humor, pain, and joy of lives lived with passion. School Library Journal has called him "a current pacesetter who has put the finishing touches on the standards for storyographies."
Loading...
or
Not Currently Available for Direct Purchase