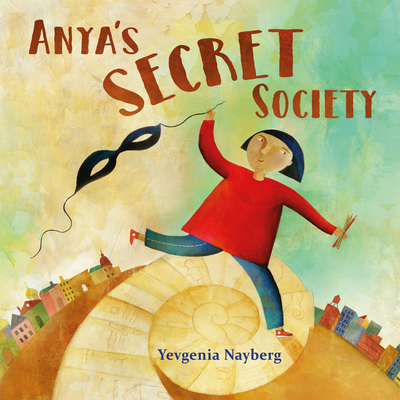 Left-handed Anya draws with great passion . . . but only when she's alone.

In Russia, right-handedness is demanded--it is the right way. This cultural expectation stifles young Anya's creativity and artistic spirit as she draws the world around her in secret.

Hiding away from family, teachers, and neighbors, Anya imagines a secret society of famous left-handed artists drawing alongside her. But once her family emigrates from Russia to America, her life becomes less clandestine, and she no longer feels she needs to conceal a piece of her identity.

Lefties get short shrift in Russia, so Anya forms an imaginary secret society for lefty artists. As Nayberg explains in this book's postscript, a tradition of conformity in Russia has created a taboo against left-handedness. Right is right and correct, and left is not. So Anya, a lefty, is forced to learn to write and do everyday tasks with her right hand, reserving her left hand for her artwork, which she does when she is alone. Surrounded on the page with Nayberg's antique-looking, movement-filled illustrations, Anya learns that some extremely famous artists—Leonardo, Rembrandt, and Michelangelo—were left-handed. With their spirits, she forms a "secret lefty society" that meets at night to "talk, laugh, and draw. And they would draw with their left hand." Then Anya moves to the United States, where left-handedness is not frowned upon, and Anya's secret society no longer needs to be secret. The rather broad characterization of the United States as a nonconformist's paradise can be taken with a grain of autobiographical salt, for this is Nayberg's experience as a young girl. Otherwise, it is the story of coping with any society's rigid norms and finding avenues for self-expression, and Anya's imagination is a bright vehicle for just such a ride. Anya's secret society is so jovial and bighearted, you wish it upon all oppressed lefties.
—Kirkus Reviews

Yevgenia Nayberg is a children's book illustrator and set and costume designer for stage and film. Her illustrations have appeared in magazines, picture books, theatre posters, music albums, and book covers, and her paintings, stage designs, and illustrations are featured in private collections worldwide. She is a recipient of numerous awards, including The National Endowment for the Arts/TCG Fellowship for theatre designers,The Independent Theatre Award, The Arlin Meyer Award, and The Ovation Award nomination. Yevgenia lives in New York City.
Loading...
or support indie stores by buying on
(This book is on backorder)