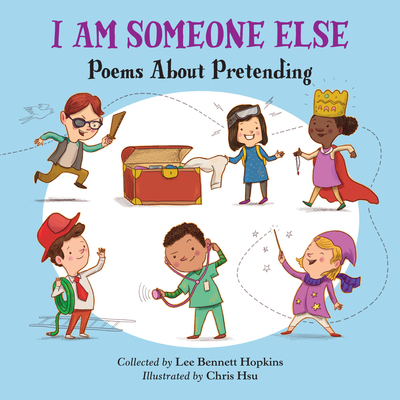 I Am Someone Else

Celebrated poet Lee Bennett Hopkins shares a diverse collection of poems that ask (with the help of Newbery medalist Lois Lowry, former US Children's Poet Laureate J. Patrick Lewis, and others), "Who do you want to be?"

Kids can imagine pretending and dressing up in this playful poetry collection, flexing their creative muscles and bucking stereotypes. (Who says that girls can't be knights and boys can't be mermaids?) Fifteen poets write about who they might like to be, musing what life would be like as a wizard, a firefighter, a video-game inventor, and more.

"There is nothing better than being yourself. You are unique and special in every way. Once in a while it might be fun to think about becoming someone (or something!) else. Who would you like to be? Imagine that you're someone else!" --Lee Bennett Hopkins

Praise For I Am Someone Else: Poems About Pretending…

"Imagine! Wish! Support! Invent!"Hopkins organizes this brief, thematic anthology into three sections under the larger umbrella of imagining: "Wish! Be a Storybook Character"; "Support! Be a Person Who Helps"; and "Invent! Be a Person Who's a Maker." Each of the collected poems is written in the first-person, and Hsu's energetic, cartoon-style digital illustrations depict the diverse children as the individual speakers. Words and pictures alike often upend stereotypes and gender norms. For example, a poem about pretending to be a mermaid by Janet Clare Fagal depicts a brown-skinned child with tight, close-cropped curls wearing a green, striped T-shirt as the voice of the poem, allowing children of varying gender identifications to see themselves. Hopkins' introductory statement affirms that "There is nothing better than being yourself," which doesn't undermine the title in the least since he goes on to affirm the fun in pretend play. Sometimes such play is aspirational, and the poems included in the categories "Support!" and "Invent" by authors such as Douglas Florian, Prince Redcloud, and Joan Bransfield Graham (with the standout offering "Nurse: Healing Hand") give voice to career ambitions. Others, such as the aforementioned "A Mermaid's Tale" poem, and Lois Lowry's "Big Problems" (about the challenges of being a giant's wife) offer up more fanciful imaginings.A good collection, for real.

Well-known anthologist Hopkins here focuses on make-believe play, presenting 15 possibilities for children to explore being and doing fanciful or everyday things, with contributions from Lois Lowry, Prince Redcloud, and Douglas Florian. Thematically divided into three sections, the poems feature peppy, reader-directed introductions, followed by first-person poems accompanied by illustrations of diverse children play-acting. “Wish! Be a Storybook Character” showcases fantasy figures such as pirates (“I cry argh to the ocean, / wail yarr to the sky”); “Support! Be a Person Who Helps” includes a firefighter, nurse, and pilot. “Invent! Be a Person Who’s a Maker” spotlights a chef, dancer, and video-game creator, among others. Colorful, cartoon illustrations depict the children, their activities, and the classroom objects inspiring them with subtle, sketchy background elements, like a girl wearing a hard hat and building with blocks and boxes against cityscape background, which extend the themes presented. Throughout, the collection conveys that there are many options for each child, irrespective of gender, and the encouraging, upbeat approach will likely pique interests and imaginations.

Lee Bennett Hopkins is the author of dozens of award-winning books for children, including both poetry collections and stories. He is a former teacher and educational consultant. He believes poetry is a necessity for children both at school and at home. He has established two poetry awards that bear his name.

Chris Hsu is a classically-trained and versatile artist who has worked in greeting-card illustration, advertising, and animation. He is the illustrator of The Boo-Boos That Changed the World. Chris is currently a background artist on the animated FX spy comedy Archer. www.chrishsu.net
Loading...
or
Not Currently Available for Direct Purchase