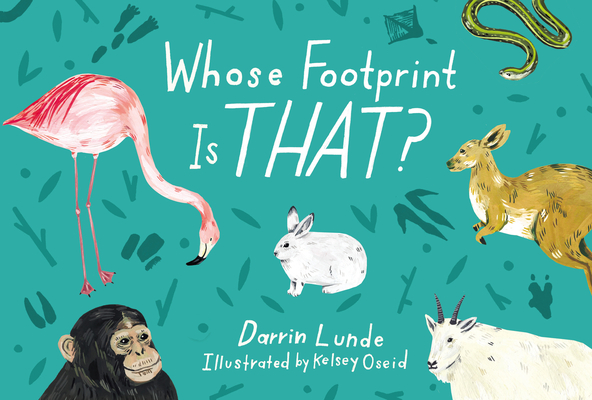 Whose Footprint Is That? (Hardcover)

A nonfiction guessing game that explores the connections between an animal, its tracks, and its habitat.

Written by a mammalogist at the Smithsonian, this clever preschool page-turner pairs seven tracks with information about the animals' locomotion, asking kids to guess which animal left which tracks behind. Whose Footprint Is That? reveals the animals--ranging from flamingos to kangaroos--in their own habitats.

Darrin Lunde has worked as a mammalogist at the American Museum of Natural History and at the Smithsonian Institute. His work has brought him into contact with all kinds of animals, big and small, throughout the remote forests of South America, Africa, and Asia where he camped for months at a time to survey species diversity and to discover new species. He is the author of Hello, Bumblebee Bat, a Theodor Seuss Geisel Award Honor Book, After the Kill, and other books about animals. He lives in Washington, DC.

Kelsey is an illustrator and lover of all things nature. Her work centers around an array of natural history subjects, often inspired by the myriad ways humans connect with and study the natural world. She received her first scat identification book around the age of 10 and loved that it helped her learn to identify the natural world around her. Her gouache illustrations focus on natural history subjects like taxonomy, biodiversity, and taxidermy, as well as related subjects like astronomy and the ways humans relate to the natural world. Her first book as an author, What We See in the Stars: An Illustrated Tour of the Night Sky, came out in Fall 2017. She lives in Minneapolis with her husband, Nick, and their two cats, Jamie and Fiona.

Praise For Whose Footprint Is That?…

Who goes there? Readers must guess which creatures left their distinctive tracks behind in this fact-filled book. On the verso page of each spread, the question reads, "Whose footprint is that?" and a clue to the maker of the print appears with a snippet of its anatomy—e.g., snout, ears, tail, feather, even, in one case, a section of a body. The recto page displays the print or prints with a sentence or two explaining how the tracks were produced. A page turn yields another spread and the answer: a portrait of the mystery animal and some interesting facts about its feet. A very ancient track maker is included, too. A tantalizing puzzle challenges kids at the end: "Can an animal change its footprints?" Adult readers would do well to let a few moments elapse while children ponder responses before they turn the page and reveal the answer—and another brainteaser. This charmer will hold young children's interest and will succeed one-on-one or as a group read-aloud. It will help develop vocabulary as youngsters learn new words including "wallaroo" and "slithering." The gouache illustrations are appealing. Tracks are large enough to be seen well (and, possibly, traced with little fingers), and their makers are portrayed along with glimpses into their habitats, with furry, feathered, and scaly charms charmingly intact. Kids will make tracks to this one—and likely step up for repeat visits.
—Kirkus Reviews
or
Buy Here
Copyright © 2020 American Booksellers Association