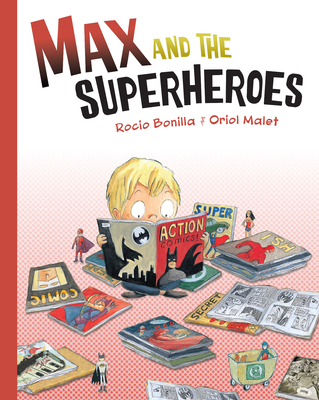 Max and the Superheroes (Hardcover)

Max and his friends are crazy about playing and learning about superheroes and their superpowers. Everyone has a favorite, and Max's is Megapower, even though his friends aren't sure that a girl superhero can be that strong. Megapower is cool for so many reasons. She's brave, tames animals, has x-ray vision, is super smart, and she can fly. She also happens to be Max's mom (which might be why she's Max's favorite!). Max is an intrepid, sassy, and funny narrator in a book that uses both traditional picture-book layouts and comic-book-like panels.

Rocio Bonilla is an author and illustrator. As an illustrator she has published several works in magazines such as El Mueble, Acosta't and Barça Kids, posters and a forty books with various publishers. As an author, she has published five titles, and her work has been translated into several languages. Rocio claims that her three children are her biggest critics and her biggest fans. If she were an animal she'd be a parakeet, and she never gets tired of drawing. She both wrote and illustrated What Color Is a Kiss?

Oriol Malet graduated from the School of Fine Arts of Barcelona. He's been illustrating since 2004 and has worked with publishers such as Teide, Barcanova, La Galera, Random House, and Animallibres.

Praise For Max and the Superheroes…

A little boy's obsession with his favorite superhero turns out to be not an obsession at all in this Spanish import. "Max is crazy about superheroes." He loves to dress like one, and he reads every comic book he can get his hands on. All superheroes are awesome, but Max's absolute favorite is Megapower. She wears a short blue dress with a gold lightning bolt on it as well as a long red cape, red cowl, and red boots. Some of his friends are skeptical about a female superhero, but Max knows that Megapower can deactivate bombs, program computers, and "control a million robots at once." She's superintelligent and incredibly strong, and she has "amazing ultravision." Max knows all this because he knows Megapower. She takes him to fabulous places and displays her superpowers all over the house. Best of all is "when she puts on her Mommy costume and gives Max a kiss good night." Cleverly, Bonilla and Malet reveal Max's superhero secret rather than explicitly stating it. The story enumerates Megapower's skills twice, once with illustrations of conventional fantastic feats (like hoisting a train) and once around the house (like rescuing a cat), still in costume. The illustrations blend a loose line-and-watercolor style for Max and his world with the closely modeled look of a comic book, a contrast that's especially effective in Megapower's scenes at home. The cast appears to be an all-white one. Mommy rules! Delightful.
—Kirkus Reviews


Like his friends, young Max has always been a big fan of costumed superheroes, but his very favorite is MEGAPOWER, who is super strong and super brave, sees through walls, can program and control giant robots, and best of all—as readers who have been paying attention to the illustrations will likely have figured out early on in Max’s worshipful tally of superpowers—lives in his house and can switch to her “Mommy costume” whenever it’s time for a good-night kiss. Assuming dashingly heroic stances in her blue spandex skirt, hood, flowing cape, and high red boots, the prodigious parent moves from awesome deeds like lifting a subway car or solving complex equations on a chalkboard to, in later scenes, such equally awesome exploits as fixing a kitchen radio, directing a Roomba, providing homework help, and using her “ultravision” to catch Max sneaking a cupcake. Children who marvel at their own parents’ apparent superpowers may come away suddenly wondering if they’ve been missing something. Pair with Timothy Knapman’s Superhero Dad (2016) for a super storytime.
—Booklist

Max is a superhero-obsessed boy who dresses up in costumes and listens to his grandfather’s tales of old-time superheroes in this translation of a book originally published in Spain. His friends are all superhero infatuated as well and each has a favorite hero. Max adores Megapower, a woman in a red cape, boots, and a blue dress with a lightning bolt. Max’s friend says that no woman can be that strong, but Max knows Megapower is incredible and that she can do anything, from computer programming and robotics to code cracking—plus, she has X-ray vision. Another page turn shows Megapower in Max’s house using a laptop while she does laundry and fixing the radio. She also helps with homework and deals with boo-boos. However, the thing Max loves best about Megapower is when she puts on her “Mommy costume” and tucks him in at night. Illustrations are done in a conventional style line with watercolor until Megapower appears. Then they become comic book-–like with text boxes and half-tone dot effect background. What stands out is Max’s defense of his idolized female superhero—his mother. VERDICT A fun celebration of moms and all things superhero, perfect for one-on-one and group read-alouds.
—School Library Journal


Originally published in Spain, this superhero story celebrates a boy’s love for his mother. Max no longer waits for Halloween to dress up as a superhero—he “realizes that he doesn’t need a special occasion.” His favorite superhero, Megapower, is brave, strong, and able to “program computers, deactivate bombs, and control a million robots at once,” among other things. Of course, Max might be biased: Megapower puts on her “Mommy costume” every night to tuck him in. Malet skillfully employs a traditional comic format, complete with text blocks, while enumerating the superhero’s extensive skill set. Transitions to more free-form illustrations depict Megapower engaging her powers in everyday situations before the duo’s connection is revealed; her X-ray vision allows her to spot Max sneakily munching on a cupcake, and her ability to decipher secret codes makes her the perfect homework helper. Bonilla’s story will delight superhero fans while showcasing the ways in which parents can be heroes.
—Publishers Weekly
or support indie stores by buying on
Copyright © 2020 American Booksellers Association