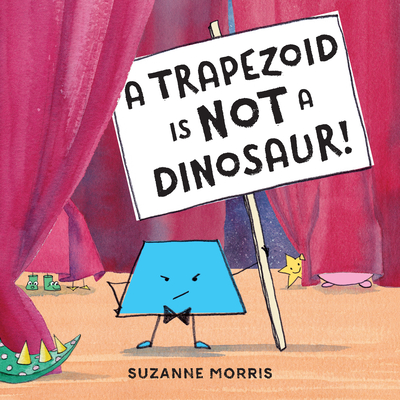 A Trapezoid Is Not a Dinosaur!

In this wildly amusing, unconventional shape concept book, Trapezoid is here to declare that he's a shape, too. He's NOT a type of dinosaur!

Shape up, shapes! Triangle is hosting auditions for all the best shapes to be in his play. Circle, Square, and Star each get a part. But Trapezoid just doesn't "fit in." Is he even a shape? The others think he sounds like a type of dinosaur. Determined to show off his usefulness, Trapezoid tries to act like the other shapes, to no avail. Eventually, though, Trapezoid celebrates his own distinct shape properties in order to become part of the performance.

Praise For A Trapezoid Is Not a Dinosaur!…

What's the deal with the odd shape whose name sounds like a dino? Triangle is the director of a space-themed play, and auditions are underway. The other shapes step up and state their strengths. Square says, "I have four sides. I can make a box. I like to stack." Trapezoid continually interrupts, trying to proclaim similar merits—"I also have four sides. But I think outside the box!"—but is consistently dismissed. Eventually, the play is cast: Circle is the full moon, Star is a shooting star (obviously), Triangle stacked on Square makes the rocket. Trapezoid is cast as a dinosaur but rejects the role, saving the show when it finds a trap door and makes a dramatic entrance to ask to be the "rocket booster." The show is a successful "BLAST OFF!" Despite Trapezoid's intrusions, the other characters display good-natured camaraderie throughout, and there is plenty of wordplay. Star's proclamation that "I have five points" is paired with a bulleted list of mostly shape-related statements, for instance. Illustrations are comics-style, with frequent paneling and word balloons. Sticklike appendages and a hand-drawn style make the shapes surprisingly expressive. The prevalent purple outer-space background on the wooden stage visually grounds the story while still allowing the shapes' soft primary colors to pop. The text ends with a brief discussion on classifying shapes, a minicomic to further visualize parallel lines, and the URL to the author's website for "more fun with shapes." An effective bridge from simple shape identification to more specific geometric facts.
—Kirkus Reviews


All the shapes are putting on a play. Circle will be the moon, Triangle will be a rocket, and Star will be a…um, star. But how can Trapezoid help?? Trapezoids are dinosaurs, right?? On its surface, this is a simple story about accepting others for their differences. But it’s greatest potential is for a STEAM-powered storytime, as each shape describes how they are different, using terms like parallel lines and right angles. There are also a ton of shape puns, which may be corny, but actually require an advanced understanding of each shape to comprehend, which create further opportunities for discussion. An author’s note asks some great critical thinking questions about each shape, making it an overall great resource. Artwork is simple and light, and reflects the intended audience. Interestingly, the shapes often stand on a pedestal that’s shaped like a trapezoid, which is a clever touch, and shows the potential of the titular character in the real world. VERDICT This title is ideal for curricular support. A solid addition for most collections.
—School Library Journal

Suzanne Morris is an author, illustrator, and designer. She holds a BFA from Parsons School of Design. A Trapezoid is Not a Dinosaur! is her debut picture book. Her marks are made by hand, using pencils, ink, and watercolor, with a digital finish. She lives in New Jersey with her husband and daughter. Suzanne offers engaging programs for schools and libraries to inspire readers to follow their own creative dreams.
Loading...
or
Not Currently Available for Direct Purchase