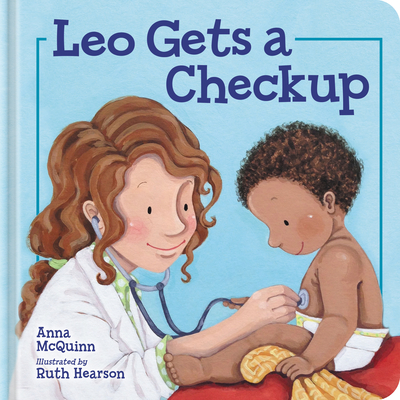 Leo Gets a Checkup (Hardcover)

When Dad takes Leo to visit the doctor, Leo learns to wait his turn, sit quietly while his eyes and ears are checked, and be brave during a shot. And, of course, Leo gets a book before he leaves! Little brother Leo was first introduced through the best-selling Lola Reads series in Lola Reads to Leo. In 2014, Leo made his debut with his own adventure, Leo Loves Baby Time, followed by 2016's Leo Can Swim. This spin-off of the best-selling Lola Reads series is perfect for babies and toddlers.

Anna McQuinn has worked in children's books for more than twenty-five years as an editor, publisher, and writer. She is the author of more than twenty books for children, including Lola at the Library, Lola Loves Stories, Lola Reads to Leo, The Sleep Sheep (Scholastic), and If You're Happy and You Know It! (Barefoot). Anna leads groups like Leo's at her local library.

Ruth Hearson has illustrated several children's books including Leo Can Swim, Leo Loves Baby Time, and Cinnamon's Fairy Sleepover. She currently resides in York, England. Ruth completed a BA in Illustration at The University of Central England in Birmingham. Following her First Class award, she was funded by the EBF to continue with her studies to complete a Masters degree.

Praise For Leo Gets a Checkup…

In this episode in the life of toddler Leo, younger brother to Lola (Lola Reads to Leo, 2012, etc.), his parents take him to the doctor's office for a checkup. Leo, a brown boy with tightly curled hair, dressed in a onesie and holding onto a table, "is a big boy now." His mother and father, who are exactly the same shade of brown, are in the background as Leo feeds himself, plays ball, sings, and dances. When it is time to go, he "puts his toys away" and gets "his blankie and Mister Seahorse." Daddy packs a bag and brings him to the clinic, where Leo sits on the floor playing with Mister Seahorse while they wait for their turn. (This doctor evidently has a separate well-child waiting room, as every soul in the diverse gathering is smiling happily—there's not a runny nose in sight.) When it is Leo's turn, he shows his doctor, a white woman, "what he can do now." He gets a sticker and a book and gets checked all over. He even continues smiling while he gets his shot, which "will keep him healthy." The rounded features and shining, rosy cheeks of the invariably smiling characters make for a pleasant trip with Leo through his safe and welcoming world. A helpful way to prepare toddlers for a visit to the doctor with a character who's easy to love.
—Kirkus Reviews

The little brother from the “Lola Reads” series goes on another adventure—this time to the doctor for a checkup. Since his debut in Leo Loves Baby Time, the toddler has gotten bigger and can now drink from a cup and eat by himself. Leo brings his blanket and stuffed seahorse to the clinic and plays as he waits his turn with the doctor. Leo’s father accompanies him into the examination room where the doctor checks his height, weight, eyes, and ears: “Thump! Thump! Leo’s heart sounds great.” Leo is also given an immunization that will keep him healthy. This book will work well to ease the stress that medical appointments can cause very young children. Leo leaves the doctor happy, healthy, and with a sticker and new book to take home. Colorful, cartoon illustrations will allow very young children to identify with Leo, as well as the other characters in the book (mother, father, doctor). While it is not a board book, the thick, sturdy pages and a hardcover with rounded edges make it a toddler-friendly choice VERDICT Recommended for purchase for the toddler shelf of any picture book collection.—School Library Journal
or
Buy Here
Copyright © 2020 American Booksellers Association